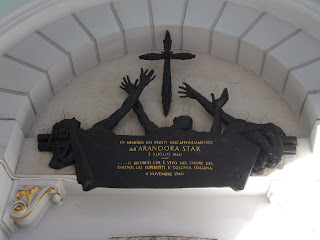 One aspect of the Home Front of the Second World War that today is often forgotten is the internment of all so called 'Enemy Aliens' at the commencement of the War. At the outbreak of war, there were in the region of 80,000 potential enemy aliens in Britain, who it was feared could be potential spies or be willing to assist our enemies in the event of an invasion.

Therefore, all Germans and Austrians over the age of 16 were interviewed by special tribunals and afterwards placed into three categories - Category 'A' high security risks, numbering about 600 who were immediately interned. Category 'B' numbering about 6,500 were 'Doubtful Cases' who were supervised and subjected to restrictions. Category 'C' numbered about 64,000 who were deemed to be no security risk and of whom about 55,000 were Jewish refugees from Nazi oppression who had escaped from Europe.

The situation was further compounded in the Spring of 1940 with the combination of Italy's entry into the war and the failure of the Allied campaign in Norway, which led to agitation amongst certain elements of the press for more alien internment. Prime Minister Winston Churchill ordered that all of the 19,000 Italians in this country be interned even though many of these people had lived in this country for ages. Many of the additional Germans and Austrians rounded up were the very same Jewish refugees who had months earlier been deemed to have been no threat. Many of these internees were held on the Isle of Man as they had been during the Great War and in one camp on the island, over 80 per cent of those held were Jewish refugees. An outcry in Parliament led to the first releases of internees in August 1940 and by the summer of 1941, only 5,000 of those deemed genuine security risks were left in internment camps.

Apart from those detained in this country and the Isle of Man, over 7,000 internees were deported. Some of these were sent to Australia, where those sent on the s.s. Dunera suffered from appalling conditions and also the humiliation of having their personal possessions either stolen or thrown overboard by the British military guards. The vast majority of those deported were sent to Canada and it was on board one of the vessels destined for that country, the s.s. Arandora Star that tragedy struck.

The Arandora Star was a passenger ship owned by the Blue Star Line which had been built by Cammell Laird of Birkenhead in 1927. Before the war, she had operated mainly in the luxury cruise market to such destinations as South America, Norway, Florida and the West Indies.

Requisitioned as a troopship on the outbreak of War, she had sailed from Liverpool on 1st July 1940 carrying a total of 1,673 people of whom 1,299 were male German and Italian Prisoners of War and internees broken down as follows - 174 Officers and crew of the Arandora Star, 200 British Military Guards, 565 Germans, of whom 86 were military POWs of 'bad character' and 734 Italian civilian internees. The vessel was not marked with a Red Cross, nor had the Admiralty requested 'free passage' for her and to compound the error, she was sailing without an escort.

At 06.15 on the 2nd July, barely one day out of Liverpool, she was torpedoed by the German U Boat U-47, commanded by Gunther Prien, one of the 'Ace' U Boat commanders. Prien supposedly mistook the vessel for an Armed Merchant Cruiser but in all probability thought that he was sinking a loaded troopship, which he was, but not loaded with the cargo he had thought. The Arandora Star sank after less than an hour but in that time, did manage to transmit a distress signal, which guided a Sunderland flying boat to the scene, which in turn guided HMCS St Laurent, a Canadian destroyer which had been escorting the battleship HMS Nelson, to the scene of the sinking.

The St Laurent reached the site of the sinking in the early afternoon and found that the doomed vessel had managed to launch 10 lifeboats and scores of rafts. There were also many survivors in the water, clinging to pieces of wreckage, many of whom were coated in oil and unable to help themselves. In a remarkable rescue, the St Laurent managed to pick up all of the survivors in the boats and rafts, together with all those that could be found in the sea. The numbers saved included 322 Germans, 243 Italians, 163 Military Guards and 119 of the Officers and Crew of the Arandora Star. This left a total of 826 who perished, including the vessel's master, Captain Edgar Moulton and over 470 of the Italians, who bore the brunt of the casualties


Once the survivors were picked up, many tales of heroism emerged - Captain Edgar Moulton was posthumously awarded Lloyds War Medal for Bravery at Sea and a German Merchant Navy prisoner, Captain Otto Burfiend was posthumously cited for his heroism in the rescue attempt for staying aboard the sinking ship supervising the evacuation. Commander Harry De Wolf of HMCS St Laurent received a Mention in Dispatches for his supervision of the rescue operation.

When U-47 returned home to Wilhelmshaven, Prien discovered the truth about what he had unwittingly done. Needless to say, the fact the he had been responsible for the death of 713 Germans and their Italian allies on the Arandora Star was kept from the Axis public. Prien himself was lost along with U-47 and the rest of his crew on March 7th 1941, depth charged by HMS Wolverine in the North Atlantic.