Black Saturday and the first day of The Blitz 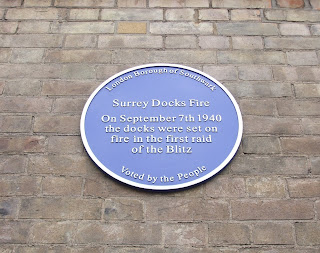 Saturday 7th September 1940 was a beautiful late summer's day, sunny with some haze but the sort of day that Londoners would try and make the most of because autumn was on it's way and with it, the threat coming from the now occupied continent across the English Channel. As always, most Londoners tried to get on with their lives. There was even football for those that were interested. Although the regular leagues had been abandoned on the outbreak of war a year ago, there was an emergency wartime league and on September 7th, West Ham were playing Spurs at Upton Park. At about 4.30pm, with Spurs winning 4-1, the sirens sounded and the referee, in accordance with standing instructions, blew his whistle and abandoned the match. As the crowds began to drift home, they could hear the sound of approaching aircraft.
This was the first time that London had been subject to a mass raid. London had first been bombed in this war on August 24th, when due to a navigational error a squadron had mistakenly dropped their bombs on the City of London instead of on Thameshaven. This error, was in part the reason why the Germans were coming back in force today. Churchill had ordered a retaliatory raid on Berlin and although the damage and casualties caused by this incursion had been light, the loss of face amongst the Nazi leadership had been huge. After all, Goering had boasted that "No enemy aircraft shall fly over Reich territory" so with characteristic fury, Hitler had ordered the Luftwaffe to switch it's attacks from the RAF's airfields and the Channel convoys to London.
So it was on this sunny afternoon that the first wave of German bombers headed in from the Channel towards the Thames Estuary. Some dropped their bombs on the oil refineries at Thameshaven and re-stoked the fires already burning there but the vast majority of the force pressed on, following the Thames and heading towards London. Their targets were the docks north and south of the river, Woolwich Arsenal, Beckton Gasworks and the various power stations and industries strung out along either bank of this then busy artery. The bombs began to fall, not just on these targets but on the rows of houses and tenements that surrounded them. Vast areas of Poplar, Woolwich, Limehouse, Millwall, Stepney, Rotherhithe and many other areas soon became a raging inferno - none more so than the area surrounding the Surrey Docks, centre of London's timber trade, where over a million tons of hard and softwoods literally went up in smoke overnight. "Send all the bloody pumps you've got, the whole bloody World's on fire!" was the message sent out by Station Officer "Gerry" Knight of the London Fire Brigade to his controller when faced with this hellish scene at Quebec Yard. Twenty four hours later, Knight would be dead too - all that was found of him was his boots and some smouldering remains. This was truly a baptism of fire for the London Fire Brigade and most of all for the Auxiliaries. Most of these AFS men had had no experience of fighting any sort of fire, let alone anything on this scale and no amount of training could have prepared them for it.
Up above, the RAF were trying their hardest to tear into the daylight raiders and the Germans certainly didn't have everything their own way. Air Vice Marshall Leigh-Mallory's 'Big Wing' tactics had been the subject of much criticism from Keith Park and other senior RAF commanders but on this day, the Duxford Wing led by Douglas Bader in 242 Squadron had shot down several raiders, as had 303 Squadron, the Poles based at RAF Northolt, who had waded into a formation of forty Dorniers and shot down or badly damaged about a quarter of them.
But as darkness fell on this Saturday evening, the next waves of bombers were already heading in - more or less unhindered by the RAF as their night fighting capability at this time was negligable. Their task was easy, just aim for the already raging fires and drop their bombs. By midnight, the London Fire Brigade had nine fires raging in the capital that required a hundred pumps and there were several notices pinned to incidents stating that the fire was out of control. In these night raids 247 bombers dropped 330 tons of High Explosive Bombs and 440 incendiaries. Many areas, especially in the East End were reduced to rubble and in some cases wiped from the map. To add to the confusion, many thought that the invasion had come and the code word 'Cromwell' was issued at 8pm - this signified that the invasion had begun and many church bells were rung to announce this to the already terrified population. The Home Guard erected road blocks and patrolled the countryside around the south and south east of London with loaded rifles.
When dawn came and the all clear eventually sounded, there had been no invasion but over 430 Londoners were dead, 1,300 more seriously injured and vast swathes of the East End rendered uninhabitable. Three of London's main line railway termini - London Bridge, Waterloo and Victoria were out of commission and as Londoners picked their way through the rubble they would see the rescuers still hard at work and the Fire Brigade still tackling the many fires that were raging. This was London's first and last major daylight raid by the Luftwaffe - the price they had to pay for these operations was too high - but it was the first of 57 consecutive nights when the capital would be bombed and this period, known as the First Blitz or Night Blitz would last right through until May 10th/11th 1941 when Hitler would at last turn his attentions eastwards towards the Russians. In the meantime, a long winter and spring lay ahead for Londoners.