The Corpo Aereo Italiano, The Blitz and The Vienna Boys Choir 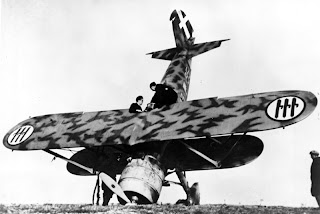 It is common knowledge that during the Battle of Britain and the Blitz, the RAF was pitted against the German Luftwaffe, it is perhaps not so widely known that the Italian Regia Aeronautica also participated in the Battle and the Blitz, albeit in a small way and unhappily for the Italians, with pretty disastrous results that typified their standing alongside their German allies.

Italy declared war on Britain and France on 11th June 1940. Up until that point, cynics especially in Germany felt that the Italian dictator Mussolini had been hedging his bets before committing himself to the war. However, with a German victory now apparently assured, he decided that he wanted to take his place alongside Hitler on the winning side and to take his share of the spoils, especially in the Mediterranean, in which he eyed British and French possessions such as Malta and Corsica with envious eyes and where he also saw the opportunity to capture the Suez Canal and thus have access to British colonies in Africa.

However, following RAF bombing raids on the Fiat and Caproni factories in Genoa, Turin and Milan, Mussolini became very keen to become involved in the Battle of Britain and exact a measure of revenge. In July 1940, he offered units of the Regia Aeronautica to Hermann Goering but was diplomatically refused. However, he was persistent and after several further requests, Goering eventually relented and in early October 1940, a force known as the Corpo Aereo Italiano, consisting of seventy five Fiat BR. 20 Cicogna (or Stork) bombers supported by CR. 42 Freccia (Arrow) biplane fighters and a few Fiat G. 50 monoplane fighters were despatched to their base at Melsbroek in the Brussels area.

Their introduction to their German allies was hardly auspicious, with eight of the bombers being damaged by heavy landings whilst arriving at their new base. The bombers were from 13 and 43 Stormo or Squadrons, whilst the fighters were from 56 Stormo. For administrative purposes, and to fit in with the overall German system, the Italian squadron names were changed to the German KG or Kampfgeschwaders 13 and 43 and JG or Jagdgeschwader 56 respectively.

Their first foray into action was hardly a rip-roaring success either. A raid against Harwich and Felixstowe on the night of 24th/25th October 1940 saw three of eighteen aircraft deployed lost through accidents and the majority of the others failed to find their targets. Their next outing - a daylight raid on Ramsgate - was slightly more successful in so far that no aircraft were shot down but of the fifteen bombers used on the raid, three were heavily damaged by flak and at least one aircraft bombed Deal in error, with the bombs falling on the Royal Marines Depot, killing five Marines and a private from the Kings Shropshire Light Infantry.

On 11th November 1940, the Regia Aeronautica saw its first major combat with the RAF during the Blitz. Ten bombers escorted by forty two CR. 42s, the G. 50s and also with some German Bf 109s assigned set off towards Harwich. The raid was soon aborted due to poor weather but before the attackers could return to base, Hurricanes of 17, 46 and 257 Squadrons attacked and brought down three bombers and three fighters. A further four bombers were destroyed in forced landings, as were two fighters. A further eight Italian fighters landed with repairable damage in exchange for two British fighters suffering from slight damage. As this raid took place only the day before the British carrier-borne attack on the Italian battle fleet at Taranto, Winston Churchill was later moved to write that "They might have found better employment defending their fleet at Taranto."

It was clear that the Italian aircraft, especially the biplane fighters with their top speed of 272 mph, were no match for the British Spitfires and Hurricanes which were nearly 100 mph faster. The German fighter pilots assigned to escort their allies were less than enthusiastic at the prospect of working with the Italians. The Germans were mostly combat hardened veterans used to flying the modern Bf 109 fighters which were on a par with the British Hurricanes and Spitfires, whilst their charges lumbered along at 267 mph in the case of the BR. 20 bombers with even the modern G.50 fighters only managing 293 mph.

Further small raids on Harwich and Ipswich followed but with no more success and on November 23rd, some of the biplane CR. 42s were attacked by Spitfires, with the predictable outcome of two being lost with more damaged with no British aircraft suffering damage in return.

In January 1941, the bombers were 'redeployed' - a diplomatic term for a retreat; the involvement of the Corpo Aereo Italiano had been an unmitigated disaster for the Italians. Their standing amongst their German allies, never particularly high, was already in decline and this situation was only to get worse in February 1941 following the capitulation of the 130,000 strong Tenth Army in North Africa to General Wavell's 30,000 strong Western Desert Force.

The Italian involvement in the Second World War was an unhappy one, with Mussolini's regime always being the junior partner to Hitler's Germany. Setback followed setback for the Fascist regime and in July 1943, following the Allied invasion of Sicily, King Victor Emmanuel dismissed Mussolini and appointed Marshal Badoglio in his place, who immediately sought an armistice with the Allies. When this was signed in September 1943, the Allies had toppled their first dictator and to add insult to injury, the Italians changed sides and declared war on Germany on October 13th.

In reality though, much of Italy remained under German control and the Italian campaign was one of the hardest fought of the entire war before the country was eventually liberated, with the final surrender of German forces in Italy only occurring on 2nd May 1945 - less than a week before the Allies were celebrating VE Day on 8th May 1945. On this very day, British troops crossed the Italian border into Austria and encountered a group of boys in the main square of the village of Hinterbichel. Some of these boys were dressed in Hitler Youth uniforms, whilst others were wearing leather shorts and traditional Austrian costume. The combat hardened British troops swung the machine guns of their armoured cars onto the boys, fearing a last ditch ambush as had been experienced elsewhere in their encounters with the Nazis. The boys, although understandably nervous, stood their ground and the British, seeing no concealed weapons held their fire. When the commander of the British armoured cars dismounted, the leader of the boys lifted his arms and the Vienna Boys Choir began to sing God Save the King. The Italian campaign was over.