They never closed (well not for long anyway) 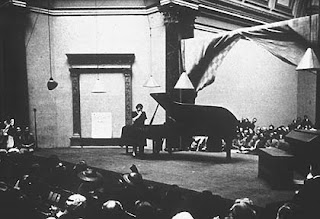 'We never closed' was the motto of the Windmill Theatre situated in London's Soho. Famous for it's scantily clad and often nude tableaux, some Londoners changed this motto to 'We never clothed' but the truth is although The Windmill remained open throughout the worst of the Blitz, it did in common with the remainder of the nation's theatres, close for twelve days from 4th-12th September 1939 following a Government decree that affected all places of entertainment.
This decision, which seemed almost guaranteed to undermine the morale of the public and which was described at the time by George Bernard Shaw as "a masterstroke of unimaginative stupidity" was introduced by a nervous government seemingly in order to close down anything that could not be deemed essential to national life. Although churches were exempted, from this ruling, cinemas and theatres were closed immediately across the land. As with many things British, this edict was in fact, only a guideline issued by the government to local authorities and although they mostly fell into line, the town of Aberystwyth ignored it and allowed their cinemas to remain open. The real reason behind the ruling was that the government wanted to ban anything that could cause large gatherings of people with the potential consequences of bombs falling on such a gathering. When seen from this point of view, perhaps the decision of the government is easier to understand, although it still seems a panicky move which always seemed guaranteed to fail.

It wasn't just cinema and theatre that suffered either; professional sport suffered too. The 1939 cricket season had almost finished in any case and the touring West Indies side had hurriedly sailed for home on Saturday 26th August as the war clouds gathered. The remaining county matches were cancelled and it was to be the summer of 1946 before Test Cricket returned. The 1939-40 football season had only just started and this was cancelled by the Football League on 6th September after only a handful of matches had been played. Friendly matches were later allowed and later still, a league of sorts was introduced in which clubs were allowed to field 'guest players' from other clubs who were serving in the Armed Forces and stationed locally. There was also a 'War Cup' competition complete with a Wembley final which always attracted large crowds. Other sports which required floodlighting such as speedway and greyhound racing were doomed to fall prey to the Blackout and the phrase 'cancelled for the duration' soon crept into the vocabulary of the public. London Zoo and Kew Gardens were also victims of the policy, although both were soon open again, with the Zoo in particular being very popular with visitors - 1.6 million in 1943 alone.

The public soon became restless with this policy and as a result, one of the few British institutions to flourish during the war were the pubs. It would have been a foolish government indeed that tried to close down these generally cheerful places of escape for the public. The general ban on entertainment couldn't last and the cinemas and theatres re-opened from 12th September, in the outer suburbs of London at first and then grudgingly for the inner London venues three days later on 15th September.

Concerts had also fallen foul of the ban but these too resumed, although many of the orchestras suffered through losing members to the call-up. The Queens Hall in Langham Place, itself later to become a victim of the Blitz, re-opened by hosting the London Symphony Orchestra on 24th September 1939, with pianist Myra Hess (pictured) as soloist and it was Hess who was soon to provide some of the cultural highlights of wartime London.

The National Gallery in Trafalgar Square had lost it's collection of paintings to the safety of a disused slate quarry in North Wales and had thus become a largely vacant space. Myra Hess made a proposal to the Director of the Gallery, Kenneth Clark that she play a lunchtime concert there. His reply was to insist that she should play every day and although this was clearly not practical, she agreed to organise a series of concerts in which she would play whenever possible. The first concert was barely publicised but despite this, the queues to enter soon stretched all the way along the north side of Trafalgar Square. These lunchtime concerts became a wartime institution for Londoners and visitors to the capital, with Myra Hess performing in over 250 of the 1,698 concerts that she arranged during six years of the war. Neither were these concerts exclusively for the 'high brow'; soldiers and ARP Wardens rubbed shoulders with intellectuals and Cabinet Ministers and despite being initially limited to an audience of 200, this was frequently overlooked and often crowds of 1,000 plus managed to squeeze into the Gallery. For this contribution to maintaining the morale of the British public, Myra Hess was created a Dame of the British Empire by King George VI in 1941.

Apart from these pursuits, the overwhelming desire of many Londoners was to head for the dance halls. Venues like the Streatham Locarno, Hammersmith Palais and the Paramount Tottenham Court Road reported crowds well above the pre-war averages. There were more dance bands playing than ever before and even the smallest restaurants felt it necessary to employ musicians.

It was inevitable that with these gatherings and the coming of the Blitz in 1940/41, tragedies would ensue and sure enough on the 8th March 1941, the Cafe de Paris in Coventry Street was struck by two bombs which killed eighty people. In a stroke of irony this restaurant, which was located twenty feet below ground, had billed itself as 'London's safest restaurant' but this shield of concrete was not enough to save it from the direct hits of the German bombs and when the rescue workers arrived they found a scene of utter carnage. The bandleader, Ken 'Snakehips' Johnson had been decapitated and diners were still sitting dead at their tables. To make matters worse, looters were mingling with the rescue workers and reportedly cutting the fingers off the dead in order to steal the expensive rings that some were wearing.

Attendances fell away for a while during the height of the Blitz and again during the Terror Weapons campaign of 1944-45 but always quickly picked up again. Civilians needed diversions from the routine of wartime life and service personnel on leave needed reminders of what civilian life was like and indeed a reminder of what they were fighting for.

Life continued and even during air raid warnings, the cinemas and theatres carried on regardless. Perhaps we should close with this message that was displayed to customers entering London's Adelphi Theatre. The gist of the message was repeated in cinemas and theatres across the country but for sheer 'stiff upper lip' this takes some beating:

'When an Air Raid Warning is received, you will be informed from the stage. Those wishing to leave will have seven minutes to find shelter. For those desiring to remain, the show will go on. Walk, not run to the exits. Do not panic. REMEMBER YOU ARE BRITISH.'