When the lights came on again; VE Day, London 1945 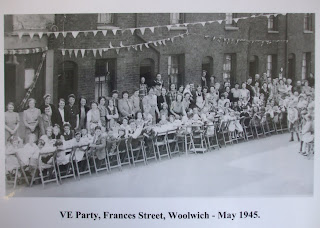 ‘When the lights go on again’ was one of the many evocative wartime songs by Vera Lynn and although released in 1943 when the end of the war seemed a long way off, by May 1945 the lights really were coming on again. The wartime blackout had been relaxed slightly in the autumn of 1944 and had become known as a ‘dim-out’ but this was nowhere near the full level of lighting that older Londoners were accustomed to. In May 1945 though, Britain had been at war for getting on for six years and some children had never known anything but dark nights and the fear of German bombs penetrating the darkness.

By early 1945 it was plain that the Germans were finished and despite the onslaught of V-2 rockets that fell on London until the end of March, it was only a matter of time before the war would be over and to paraphrase the words of the song, the boys would be home again.

However, as with all things connected to war, the end of the European War was shrouded in chaos and uncertainty. On 7th May, everyone knew that Hitler and Goebbels were both dead and that a group of high ranking Germans had surrendered to Field Marshal Montgomery on Luneburg Heath. It was common knowledge that Berlin had fallen to the Russians and that at some point the unconditional surrender demanded by the Allies was about to be signed at General Eisenhower’s headquarters in Rheims but despite all of this, there was no formal announcement as to what was happening for the simple reason that the situation in Europe was ever changing.

In the meantime, the crowds began to converge on London in preparation for the end of the war and the extra paid holiday that had been promised by the Government to mark the end of the war with Germany. The pubs were doing a roaring trade and seemed to have suddenly found extra supplies of booze from somewhere. Everywhere, there was the anticipation of a mass celebration but the British, being then as now a basically reserved nation of people, were reluctant to start partying prematurely.

On the 8th May, it was officially over. Winston Churchill had broadcast to that effect and by that afternoon vast crowds – Londoners and Foreign servicemen and women alike – were flowing into Whitehall, where it had been announced that Churchill would speak at 3 o’clock. Right on time, he appeared on the balcony of the Ministry of Works and told the crowds that hostilities would cease at midnight that night. This naturally was greeted by cheers and when he spoke the words “The German war is therefore at an end” the crowd erupted. His voice cracking with emotion, Churchill ended his speech with the words “Advance Britannia! Long live the cause of freedom! God save the King!” The buglers of the Scots Guards the sounded the ceremonial ‘Cease Fire’ and then the band struck up the National Anthem, which was sung with great reverence by everyone present, young and old, civilians and soldiers alike, many of whom would have been doubtless thinking of absent friends who had not lived to see this day of final victory.

After this moment of reflection, there were of course wild celebrations to be seen, not only in London but in New York, Paris, Brussels and every major city and town in the Free World. Despite these celebrations, there were many who chose not to be with the crowds and preferred to be on their own or just with their families. Many of these people had lost loved ones during the Blitz or on service overseas with the services and whilst they were still glad to see the end of hostilities, they were naturally in a more sombre mood on this special day. It must also be remembered that many thousands of servicemen were still serving overseas, not only in Europe but also fighting the Japanese and the relatives of these men were also not inclined to go overboard with their celebrations.

For the children though, there were the street parties as in the example shown above in Woolwich. Hurriedly organised affairs, they were widespread across the country and as in the case of the pubs, food still strictly rationed seemed to suddenly appear as if by magic and ensured that these street parties were memorable affairs for all concerned.

For those adults still celebrating, London was ablaze with floodlighting, switched on to illuminate buildings rather than German bombers and for those in the suburbs where there was no floodlighting, some huge bonfires were lit on the many bomb sites and these bonfires gave the National Fire Service one of their busiest nights since the Blitz. Many of the large fires got out of hand and as senior fire officer Cyril Demarne recalled, the Fire Brigade soon discovered (or re-discovered) that the public could be very fickle. Only a few weeks ago, the firemen were being cheered as heroes for fighting the fires lit by the German bombs and rockets; now they were being booed as party poopers for dousing the bonfires that were threatening to get out of hand.

Peace had returned to London and although the Japanese war was to continue until August 1945, the people of the capital could at last begin to think about rebuilding their city and their lives.