The Wednesday and The Saturday: Birthday Presents from Hell 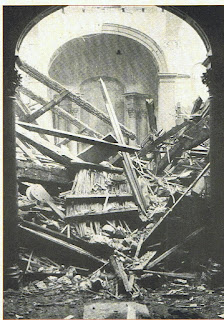 The week following Easter 1941 saw London enjoying a short lull in the Blitz. The raids had died down from the intensity of nightly raids and though there had been raids throughout the early months of 1941, there had not been a serious raid on London since the 19th March. Londoners were not to know it but Hitler's thoughts were beginning to turn towards the invasion of the Soviet Union, for which task he would need to divert a considerable amount of his Luftwaffe resources from the Blitz on British towns and cities.

However, all this was in the future and before the worst was over London was to suffer three more heavy raids, culminating in the heaviest of them all on the night of 10th/11th May 1941, which we have examined previously in this blog.

In this short article, we shall examine what proved to be the penultimate two raids of the First Blitz, on the nights of 16th/17th April and 19th/20th April. These raids were so heavy that they became known in Londoners' folklore as 'The Wednesday' and 'The Saturday' respectively. Both of these raids were laid on as a strange sort of present to commemorate Hitler's birthday on 20th April, although 'The Wednesday' was also a revenge raid for damage caused to the Berlin State Opera House on the 9th April, in one of the RAF's early raids on the German capital. Indeed, a forewarning of the raid that would go down in history as 'The Wednesday' was given by William Joyce, aka 'Lord Haw Haw' in one of his 'Germany Calling' broadcasts from Hamburg, when he announced "There's going to be a bombing" although naturally, he did not give away the actual date of the planned raid.

These raids were savage in their intensity and affected parts of London that had hitherto only received light attention from the Luftwaffe, as well as re-visiting other areas that had already seen plenty of damage inflicted. So it was that as well as the East End and southeastern suburbs of London, areas such as Chelsea, the West End and St Marylebone were heavily hit in these two raids and though there is insufficient space in a blog of this nature to visit every target, we can at least examine some of the more notorious incidents across London on these two nights.

One famous London landmark destroyed on 'The Wednesday' was Chelsea Old Church, the home of Sir Thomas More's private chapel. Apart from the near total loss of a fine historic building, today happily restored, this tragic incident also saw the loss of five Fire Watchers, including the Canadian AFS volunteer, Yvonne Green, whose story has been told in a previous post in this series. Elsewhere in Chelsea, the famous Royal Hospital, home of the Chelsea Pensioners was also severely damaged on 'The Wednesday' when the Infirmary was destroyed by a Parachute Mine. These deadly blast weapons, converted from naval mines were used in large numbers during these later raids of the Blitz and it was one of these which cost the lives of fifteen in pensioners and Royal Hospital staff in this one incident. One of those killed was 101 year old Henry Augustus Rattray, a veteran of the Zulu Wars who had served with the 24th Regiment of Foot. The building itself had been designed by Sir John Soane and built in 1809 and had the damage been incurred today, then probably this fine historic building would have been restored. As it was, damaged buildings in wartime London, now matter how historic were invariably pulled down as unsafe. The site was cleared and is now the location of the excellent National Army Museum; a new infirmary was finally opened on a new site within the Hospital grounds in 2008.

Moving away from Chelsea, we move to the West End, which like Chelsea had suffered relatively little until now. The City of Westminster, then as now encompassed the bustling West End as well as the seat of government and it was in the former part of the borough that we examine our next incident, which resulted in the death of one of Britain's singing stars of the day. Al Bowlly was a major star of stage and screen, whose popularity had transcended national barriers which had made him popular on both sides of the Atlantic, which was quite an unusual achievement for a British star in those days. On 'The Wednesday', Bowlly had played a concert in High Wycombe and had been given the opportunity of staying overnight in the Buckinghamshire town but had eschewed this offer in order to catch the last train home to Marylebone in order to sleep at his own apartment in Duke Street, just off Jermyn Street. It was to prove a fatal decision as in the early hours of the morning another deadly Parachute Mine exploded outside. When rescuers found his body, it was unmarked and in a final touch of irony, it was discovered that he had died from a severe blow to the head, caused by the heavy bedroom door being blown off it's hinges and striking him a fatal blow.

We move now to 'The Saturday', the second of the raids to commemorate The Fuhrer's birthday and travel across London to the historic Borough of Greenwich, already heavily hit during the earlier raids of the Blitz. As now, this borough was the home of such historic buildings as the Royal Naval College, The Queen's House and National Maritime Museum, in 1941 it was also the home to a considerable amount of industry and another of these historic buildings was located in what was then a somewhat run down part of the town centre. The parish church of St Alfege has been located on the current site since the year 1012, where it reputedly marked the site of the martyrdom of Alfege, Archbishop of Canterbury who was murdered at that location by Danish Vikings on the 19th April 1012. The second church, dating from 1290 was the location of the future King Henry VIII's baptism in 1491. The present church, designed by Nicholas Hawksmoor, dates from 1718 and is the site of the tombs of amongst others, Thomas Tallis and General James Wolfe, victor of the Battle of Quebec in 1759 and whose statue looks down over Greenwich from the heights of Greenwich Park.

In a strange quirk of history, the interior of this fine church was to be largely destroyed on the 929th anniversary of Alfege's murder when incendiary bombs lodged in the roof timbers and brought the whole structure blazing into the main body of the building where it burned out of control. The aftermath can be seen in the photograph at the head of this page. Fortunately, the sturdy stone structure survived and the church was rebuilt after the war and rededicated in 1953. Today, the church stands proudly over the busy, rejuvenated town centre and is well worth a visit.

Following these two heavy raids, London again enjoyed a short lull before what was to prove the last and largest raid was unleashed on the night of 10th/11th May 1941.