2015 sees the 75th anniversary of the Battle of Britain and the commencement of the Blitz, initially on London but which ultimately affected most cities and towns within the United Kingdom. The New Year of 1941 saw Britain in the midst of the Luftwaffe's bombing campaign against British cities, with seemingly no end in sight. Indeed, London was still licking it's wounds from the great fire raid of 29th/30th December 1940, when much of the City of London, the historic 'Square Mile' had been torched and which had seen St Paul's Cathedral defiantly rising above the smoke and flames.


Although the casualty figures were never to reach the doom-laden figures predicted in some quarters before the war, some 60,000 British civilians were ultimately to lose their lives during the Second World War as a result of enemy action, including the Blitz, the so-called "Baedecker" Raids and Little Blitz, along with the 'Vengeance' Weapons - the V-1 and V-2 missiles.

One of the questions often asked is how are the Civilian war dead remembered and commemorated, outside of their own families?


The excellent Commonwealth War Graves Commission keep meticulous records, not only of military war dead from the Great War onwards, but also of the civilians of the Commonwealth who lost their lives during the Second World War. There is also a Roll of Honour kept at St George's Chapel, Westminster Abbey which is on permanent display.

Civilian casualty records, like the Civil Defence system of this country, was organized on a municipal basis, which can sometimes lead to confusion when attempting to trace a casualty of the Blitz. The criteria used for recording a casualty is not where he or she lived but rather where the person died, so for example, if an individual lived in Greenwich, Southeast London but worked in Westminster and died at his or her place of work, then the individual is recorded as a Westminster rather than a Greenwich casualty - their place of residence was irrelevant, unless of course they died at home or within their 'home' borough. Any method of recording casualty figures can seem heartless at times, but the system that was used was probably the most sensible that could have been devised.

As to physical reminders, these take many forms. Obviously many casualties are commemorated in the conventional manner by a grave marker but with many of the larger incidents, individual grave stones or markers were not possible, as the victims were buried in mass graves. This was the case for example, at Coventry, where 808 victims of the 14th November 1940 were interred at the London Road Cemetery and commemorated accordingly.

At the site of other major incidents, such as Britain's worst V-2 at Woolworth's, New Cross branch, a commemorative plaque has been erected by the local authority. Other local authorities, apart from having their own books of remembrance, usually on display at the relevant Town Hall or borough archives, ensured that a physical memorial was erected within the borough, which often listed the names involved.

The organized civilian services such as the Police Services and Fire Brigades are remembered too - the charity Firemen Remembered has an ongoing project to commemorate the fallen London firefighters of the London Fire Brigade, Auxiliary Fire Service and National Fire Service. This writer has been fortunate enough to attend several of the unveilings of their distinctive plaques and it is to be hoped that many more of these will follow in the coming years.

The other memorial that one stumbles across from time to time, are the most moving of them all; these are the private commemorations, of work colleagues, loved ones, friends, neighbours, of people who simply deserved to be remembered. This writer came across one such memorial recently when attending a birthday party at a Girl Guides Hall in Ruislip, Middlesex and is a moving tribute to Capt. Constance Castle and Ranger Mary Groves, the latter aged only 16, who "together were called to Higher Service due to enemy action - February 28th 1941."

A local tribute placed there by the victims' Guiding colleagues and friends and which, quite rightly is still on display almost 75 years later.

Sometimes the memorial commemorates civilians caught in a much larger tragedy, such as the plaque at Turks Row, Chelsea which although rightly giving prominence to the 74 American service men and women killed by the V-1 which fell there on 3rd July 1944, also mentions the 3 civilians killed in the same incident.

Another 'private' memorial can be found in The Cut, near Waterloo Station and commemorates, in a very low-key manner, those sheltering in the cellar of the erstwhile Walklings Bakery on the night of 16th/17th April 1941. The building suffered a direct hit and all 54 people sheltering below were killed. This plaque is so small that it can easily be missed but to those 'in the know' it can still be found as a moving tribute to those who lost their lives. 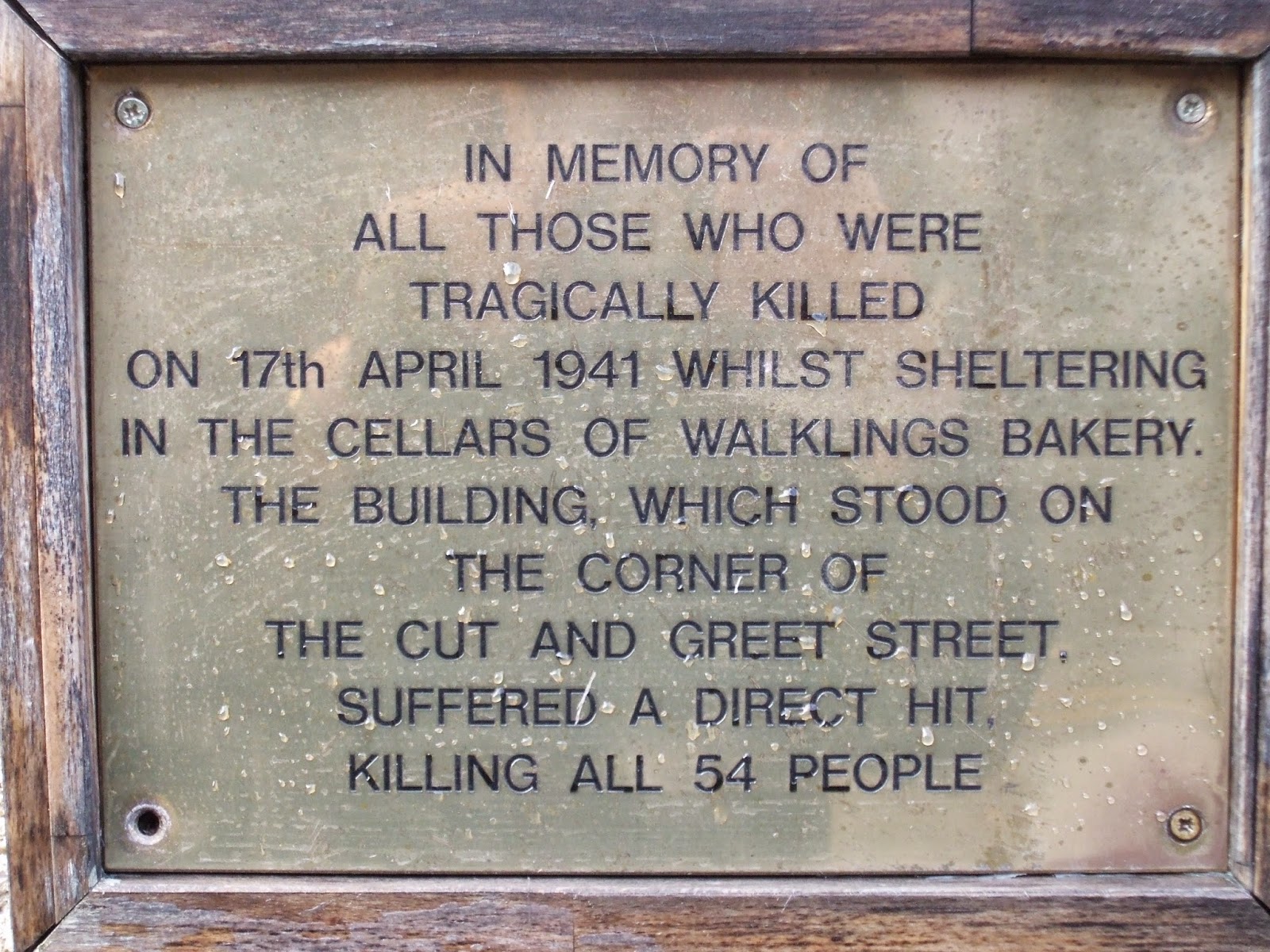 The discovery of these private memorials is a source of constant fascination and if any readers of this blog are aware of any, then please feel free to leave a comment or email me with the details.

Next time, we shall take a look at some of the plaques commemorating some of 'the Lost Treasures of London' - those historic buildings lost forever during the War.