My thoughts on Dunkirk 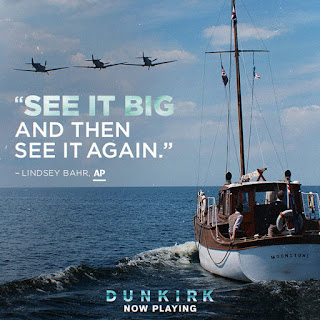 As regular readers will know by now, this blog isn't usually in the business of film reviews, so please don't expect a Mark Kermode or Barry Norman style appraisal. As readers will know, I belong to the generation brought up on the classic British war films of the 1950s and 60s and have an in-built suspicion of anything made later than about 1977. In my opinion at least, many of the more recent films of the genre are pretty ordinary and I struggle to take them seriously. It's difficult for me as a military historian and guide to watch these films without forever nit-picking about the accuracy, or lack thereof concerning the uniforms, the equipment, the aircraft, the ships and so forth, at which point my long suffering friends who have been dragged along to watch the film, usually begin to lose the will to live!

However, the new Dunkirk directed by Christopher Nolan is an important work that has attracted much attention and it was because of this that I decided to go along and watch it for myself at the cinema with (hopefully) an open mind.

I still had a fair amount of trepidation and maybe even some misgivings as I entered the Barbican Centre yesterday and perhaps this was because subconsciously, I was allowing comparisons with the 1958 Ealing Studios version of Dunkirk, which starred Richard Attenborough, Bernard Lee and John Mills to prejudice my thinking and was wondering whether the new film would measure up to this British classic.

Firstly - and this doesn't give away any spoilers - the new Dunkirk cannot be compared to the 1958 film as they look at the evacuation of the British Expeditionary Force (BEF) in completely differing ways. The old film tells the story of the whole campaign and covers the fighting withdrawal through Belgium and northern France to the coast and the subsequent evacuation, as well as telling us something of the mood in Britain, of the complacency of the 'Phoney War' period and how people were shaken out of that complacency with a jolt. By contrast, Nolan's work establishes where the British and French allies are inside the opening shots of the film. They have already been defeated and pushed back inside the Dunkirk perimeter, where the armies await evacuation back to England.

The new film contains very little dialogue and is a series of three separate threads that gradually become interlinked. Firstly we follow the stories of two British soldiers, Tommy and Alex played by Fionn Whitehead and Harry Styles (who can act and does so very well) and their various attempts to get home. Next we see the evacuation through the eyes of a small boat owner, Mr Dawson who is assisted by his son Peter and a deck hand, George. Mr Dawson is a plausible character played with great authority by Mark Rylance as are his two young helpers played by Tom Glynne-Carney and Barry Keoghan. The last of the three stories shows the evacuation through the eyes of Farrier and Collins,  two Spitfire pilots played by Tom Hardy and Jack Lowden respectively. In a nice nod to British war films of an earlier era, we hear the voice of Michael Caine as the RAF Fighter Controller coming over the radios of the Spitfires. As would be expected, the Royal Navy features strongly in this film and one of the major supporting characters is Commander Bolton, played by the excellent Kenneth Branagh, who is the Naval Beachmaster in command of the evacuation through the East Mole (a breakwater) in Dunkirk Harbour.

Without giving too much of the plot away, the film follows the attempts of the two soldiers to get away as various ships they are on board are sunk by bombs, torpedo and gunfire in some harrowing and suspenseful scenes before they are eventually rescued by Mr Dawson and his small boat, the Moonstone. On their way to Dunkirk, Mr Dawson and his son rescue a soldier played by Cillian Murphy, who appears to be the only survivor of a destroyer that has been sunk and who is not surprisingly, suffering from severe shock. He at first unwillingly, becomes part of their crew and we see how the Moonstone is first on the scene when one of the Spitfires is shot down and ditches in the sea adjacent to the small boat. Collins the pilot, is rescued just before the aircraft sinks with him inside it and he too ends up helping the others with the evacuation. The Moonstone, along with the remainder of the armada of small boats eventually reach Dunkirk harbour, where they assist in rescuing Tommy and Alex from their sinking minesweeper, as well as the remaining small craft lifting men from the beaches and from the Mole.

There is much more to the plot than this but I do not want to spoil the film for those wishing to see it for themselves. There are, in my opinion, one or two slight holes in the plot and there are some minor criticisms as to the equipment and the look of some of the scenes. For example, we never see more than one large ship alongside the East Mole at any one time and we know that in reality, the breakwater was used extensively by multiple numbers of destroyers, minesweepers and requistioned ferries. This can probably be explained by budgetary restraints and the director's aversion to using CGI in his films, so this criticism can be tempered by Nolan's quest for realistic looking scenes. Another small gripe is that the beaches never quite looked crowded enough for me, although this can probably be answered in a similar way - you can only have so many extras and the days of a "cast of thousands" are probably long gone. Some of the equipment is not quite right but it is not possible to find an authentic 1940 vintage destroyer or minesweeper without resorting to CGI - the vessels used do by and large, have the right look to them. Also, in one scene, we see container cranes in the background when we are supposed to be in 1940, some thirty years or so before the invention of the shipping container - could these not have been airbrushed out of the picture?

We also see the three Spitfires buzzing across the Channel at wavetop height - this is absurd, as for them to enter into any sort of air combat with the Luftwaffe, they would need to be at height in order to have any sort of advantage with the Bf109s that they were likely to encounter. This was the main reason for the perception amongst the soldiers of the BEF that the RAF were not there to protect them. Of coure, the RAF were there but much of their combat with the Luftwaffe took place at high altitude or inland from the beaches. The Spitfires in the film also seem to have an unlimited supply of ammunition for their machine guns, when in reality the Mark 1 only had enough for fourteen seconds firing. There is also too much emphasis placed on the role played by the 'Little Ships', which in reality were only responsible for lifting between five and seven percent of the total number of 338,226 British and French soldiers evacuated, although they did perform vital work in ferrying men off the beaches. The vast majority of those evacuated were lifted from the Mole at night by the Royal Navy destroyers and minesweepers, as well as the requisitioned ferries and excursion steamers of the Merchant Navy and in this respect, the film does perpetuate the myth of the Little Ships of Dunkirk. My only other very slight criticism is not specifically aimed at this film but is a more general complaint in that it is extremely loud. I know war is loud but whenever I see any film in the cinema these days, the volume in the theatre does always seem to be set at level eleven but perhaps this is more to do with the vagaries of my ears rather than anything else!

However, the above are minor criticisms in the scheme of things and there are a whole lot more positives than negatives about this film. Much of the location filming was shot in and around Dunkirk and that counts for much with me, at least. The three Spitfires we see are all Mark 1s, absolutely authentic for the period. Amongst the ships used for the film, we see MTB 102, which in reality was one of the final vessels to leave Dunkirk in June 1940 and some twelve of the surviving 'Little Ships' were also used in various scenes to recreate the evacuation.

The film is also extremely respectful to the period as well as to the people of this time and succeeds in capturing something of the real spirit of 1940. Also, although there are some understandably harrowing scenes of battle and of ships sinking - it would be impossible to make a film of this nature without showing people getting killed - it is done in a restrained way. There is no gratuitious blood and gore in the way that some recent war films seem to delight in.

In one important respect, this film does resemble the 1958 version of Dunkirk, as well as many other British war films of the period, in that it is extremely understated and almost modest in the portrayal of events that helped shape history and director Christopher Nolan together with his cast and crew are to be congratulated on having achieved this, especially as this is an American production that covers events from a British perspective during a period that was long before America entered the war.

As has to be the case with any film portraying real life events, much of the action is compressed and many of the characters are amalgams of several real people. For example, Branagh's character, Commander Bolton appears to be a mix of Captain Bill Tennant, the Senior Naval Officer at Dunkirk and of Commander James Campbell Clouston, a Canadian officer in command of the East Mole, who was drowned when his motor launch was bombed and sunk whilst returning to Dunkirk from Dover after a short rest period. Mark Rylance's character, Mr Dawson seems to be at least in part based upon Charles Herbert Lightoller, one time Second Officer of the Titanic, who survived that particular disaster and who in retirement, took his yacht named Sundowner, across to Dunkirk with his son as a deck hand and rescued the implausibly large number of 130 soldiers, squeezed into the cabin and on deck. On arrival back at Ramsgate, the men filed out in a seemingly never ending stream, at which point a bystander suddenly said to Lightoller "God's truth mate, where did you put them all?" a line that is repeated in the film. Some of the exploits of the Spitfire pilot played by Tom Hardy appear to be at least in part based on Al Deere, the New Zealander who became a Battle of Britain 'ace' and who also took part in fierce air combat over Dunkirk.

There was one scene towards the end of the film that even had this cynical old military historian slightly moist eyed. As they disembark from the Moonstone at Dover, one of the young soldiers we have been following and who is by now caked in oil and dirt says to an elderly man who is handing out blankets "I'm not a hero, all I've done is survive." The old man, who we assume is himself a veteran of the previous conflict replies "Well, that's good enough - well done!"

If you haven't yet seen this film, I urge you to do so as I feel it is a respectful and moving tribute to all of those who took part in the real life evacuations some seventy seven years ago.