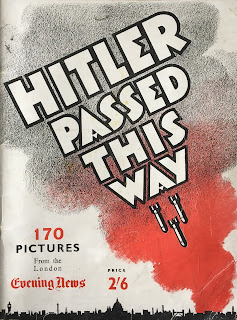 The booklet takes the form mainly of a series of 'before and after' shots of various buildings in London destroyed during the Blitz and subsequent V-Weapons campaigns. This anthology was published in late 1945 when memories of these events were still very fresh in the minds of Londoners and the linking text is very much of this time and not surprisingly, makes no mention of the fact that the RAF had until very recently been meting out the same sort of indiscriminate treatment, only on a much greater scale, to German civilians that is described in the book thus:

"Many times from September 1940 until March 1945, did Hitler single out London for his major effort of destruction. The docks, the City, the east end, the west end, north and south London, the railways, the bridges and the suburbs, all had their nights of high explosive bombs, great and small. Night after night Hitler rained incendiary bombs on London. He dropped huge land mines by parachute to wipe out whole districts. To make certain the killing of large numbers of non-combatants, women and children alike, he employed delayed action bombs of devilish ingenuity."

The mood of the British public had not yet mellowed following six years of war and the full impact of the destruction of German cities such as Hamburg and Dresden by the RAF had not been fully realised. At somewhere in the region of 42,000, the death toll from the Gomorrah raids on Hamburg in late July and early August 1943 had comfortably exceeded the 30,000 of London for the entire war and yet no mention is made of this aspect of the war that the British public were still happy to conveniently brush under the carpet at this point.

Taking this aspect aside, the photographs offer a fascinating view of a long-vanished London and whilst it would be unfair to reproduce more than a handful of photographs here, an interesting game of "then and then and now" can be played at some of the locations featured in the images.

The above three photos of the Cordwainers' Hall in Cannon Street show how in many cases, new views of London were opened up by the Blitz. The Cordwainers' Hall that was destroyed on the night of 10/11 May 1941 only dated from 1909 but contained many relics and artefacts from the previous Halls on this site. These included chimney pieces and wooden escutcheon pieces which had survived the Great Fire of 1666, only to fall victim 275 years later. Fortunately, other items such as various portraits and silver plate had been stored off site and were therefore saved. The loss of the Cordwainers' Hall opened up a new vista of St Paul's Cathedral and the area is now a pleasant open space that is much loved by City workers as a summer lunch venue.

Another victim of the events of 10/11 May 1941 was the International Headquarters or "IHQ" of the Salvation Army, located then as now, at 101 Queen Victoria Street. On this, the heaviest night of bombing that London saw during the entire war, the firefighters were hindered by a strong wind, which was unusually blowing from the east, rather than the prevailing westerly wind. This was driving the fires westwards along Queen Victoria Street, threatening Faraday House, which at that time housed the largest telephone exchange in the world, including international lines and a radio link with Washington DC. A fortunate change of wind direction saved Faraday House but not before IHQ was consumed by the flames. There was one tragic incident whilst efforts were being made to save the building - one Salvation Army worker rushed out of the building, tripped over a fallen telephone cable and was run over and killed by a passing Fire Engine. There were the usual scenes of quiet heroism here too, with a Salvation Army canteen van serving refreshments to the army of Civil Defence workers fighting to save IHQ and Faraday House. One firefighter, George Woodhouse from Holloway noticed:

"The two Salvation Army lasses were handing out cups of tea and biscuits as if it were a Sunday School outing. They appeared to be completely unaware of the bombs falling all around them. I often wondered what the word 'courage' meant, but on that night, those two lasses had it in abundance."

Today, 101 Queen Victoria Street is still home to the IHQ of the Salvation Army but it is now a modern steel and glass building, although still on a similar scale to that of it's predecessor.

Sometimes the views of 1940 and today cannot easily be compared. Today, residents of Greenwich and visitors alike are accustomed to seeing the Cutty Sark, the last surviving British tea clipper and a long-term fixture in Greenwich. It was not always the case though; the site in King William Walk was once occupied by a large public house, The Ship Hotel, which was renowned for serving freshly caught whitebait suppers, often complimented with champagne. The hotel attracted a varied clientele, including government ministers and members of the judiciary. It had already begun to fall upon hard times, when on the night of 1 November 1940, it received a direct hit from a high explosive bomb, completely destroying the premises. Today, the site would be unrecognisable and is another example of a new vista being opened up by the bombs.

Sometimes though, it isn't possible to provide any sort of 'then and now' perspective, for the simple reason that the neighbourhoods that were bombed simply ceased to exist. There are examples of this in the East End of London but one which is covered in Hitler Passed This Way is particularly poignant.


If one looks for Sutherland Terrace in Pimlico today, it does not exist, for it was completely wiped out on the night of 16/17 April 1941. Inspection of a pre-war A to Z Atlas reveals Sutherland Terrace about halfway up the page, running between Sutherland Street and Cumberland Street, forming what must have been a slightly confusing crossroads with Winchester Street. A glance at the present day Google Streetview shows no trace of Sutherland Terrace. Such was the ferocity of the bombing that the terrace was obliterated, complete with it's once famous public house, the splendidly named 'Monster' of which we see 'Before and After' views in the book. It was a bad night in Westminster, with 148 killed, 173 high explosive bombs, seven parachute mines and a community destroyed.


Hitler Passed This Way is still fairly easily available today and provides fascinating images of a bygone London, not only during wartime but also during the more peaceful years immediately prior to the Second World War.