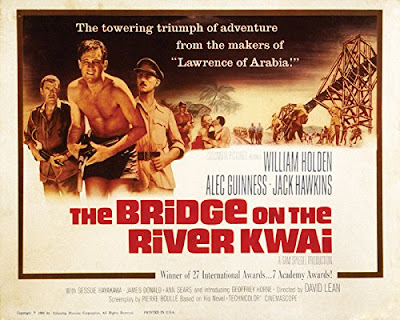 Regular readers of this blog will be aware that apart from my interest in military history, I also have a passion for movies and although my love of film covers many genres, not just those concerned with  war and conflict, it is a war film that piqued my interest recently when I re-watched it for the first  time in many years. At about this time each year, I am a volunteer at the local Charlton & Woolwich Free Film Festival, at some events purely as helper to prepare and take down our equipment, sometimes to shake a collection bucket and usually once or twice per festival, as an Event Manager, where I am lucky enough to choose a film and to either introduce it, or (usually) to arrange a guest speaker or other events to dovetail around the screening.

This year, the festival made a welcome return to the wonderfully evocative venue that is the Garrison Church of St George at Woolwich. Ongoing restoration work at the church had meant that we couldn't stage an event there last year but this year, the Trust which is responsible for the maintenance of the church chose a film with a military theme for the screening, the 1957 classic "The Bridge on the River Kwai", directed by David Lean which amassed no fewer than seven Academy Awards. I had been on holiday when the film was selected and was therefore delighted to be asked to introduce the screening and provide a few insights and personal thoughts on the film, even though this wasn't "my" event.

As I hadn't seen the film for a number of years, I made a point of purchasing the DVD a few weeks previously so as to re-acquaint myself with the movie. Whilst I remembered that it was an epic production, as could be expected from Sam Spiegel and David Lean, I was immediately struck by the sheer scale of the production and beauty of the locations. The screenplay was also far better than I had remembered and my overall impression of the acting was also extremely positive.

The origins of the film go back to 1952, when Pierre Boulle's novel, "Le Pont de la Riviere Kwai" was published. Boulle was also responsible for a later novel, also adapted for film, entitled "Planet of The Apes" but we shall forgive him for that, bearing in mind his earlier work! The novel was based in part on Boulle's own experiences as a prisoner of the Japanese following his capture at Singapore whilst operating as an agent for the Free French and tells the story of a group of British soldiers, under the fictional Colonel Nicholson who are set to work as slave labour in constructing a bridge over the River Kwai, in reality the Mae Klong River, which Boulle had confused with the real River Khwae at Kanchanburi at the time. In the novel, Boulle deals with the subject of collaboration by French officers but in the film version, the officers and men depicted working on the bridge are all British - more historically accurate, except for the subject of collaboration, which caused much ill-feeling and resentment amongst veterans at the time, who knew full well that such behaviour had not occurred amongst any British officers.

Sam Spiegel purchased the film rights and set about choosing a director; Fred Zinneman, Howard Hawks, William Wyler, John Ford and Orson Welles were all considered before British director David Lean was settled upon. Casting for the four main male stars saw Jack Hawkins signed up initially - he was to play Major Warden, the leader of the British Commandos tasked with destroying the bridge. William Holden was next on board, cast as Commander Shears, a US Navy enlisted survivor of the USS Houston, who is masquerading as an officer to ensure a better chance of survival. He escapes from the camp at the beginning of the film but is horrified to be detailed to return to the bridge as part of the deal for remaining an officer. Japanese actor Sessue Hayakawa was cast as the inflexible and harsh Colonel Saito. The final actor to be engaged for the project was Alec Guinness, who was to play Colonel Nicholson, the somewhat stiff and stubborn British senior officer. Guinness was initially reluctant to take the role as he was wary of working with Lean and for his part, Lean was not keen to cast Guinness as he felt that with his recent history of light comedic roles in various Ealing comedies, Guinness would not convince audiences with his portrayal of the somewhat "buttoned up" British Colonel.

The screenplay was written by Carl Foreman and Michael Wilson, both of whom were on the Hollywood blacklist at the time for supposed pro-communist sympathies and were working in exile in England. Because of this, they had to work in secret - so secretly in fact that the name of Pierre Boulle appears on the credits for the film and was awarded the Academy Award for Best Original Screenplay, which would have been quite an achievement for someone who did not speak or write English. This wrong was subsequently righted when the two genuine scriptwriters were posthumously awarded the Oscar in 1984.

The main location shooting took place is Ceylon (now Sri Lanka) and was not without difficulties. Predictably, Lean clashed with many of the cast, especially Guinness, who wanted to play Nicholson as a slightly softer, more gently humorous character, whilst Lean wanted him to be portrayed as "a bore". Some of the British actors, especially James Donald who played the Medical Officer Major Clipton thought the novel "anti-British" and were uncomfortable with the undertones of collaboration. All of this exasperated David Lean, who was pleased to see the back of the British stars and who supposedly enjoyed his dealings with William Holden far better. Another scare came when the film of the climactic destruction of the bridge, which was being flown to London for processing, went missing for several days. The destruction of the bridge was very much a "one take" affair and would have cost hundreds of thousands of dollars to re-shoot. Fortunately, the film was discovered at Cairo Airport and despite having sat in the hot sun for nearly a week, was still in perfect condition and was developed without any further hitch.

The music for the film was composed by Malcolm Arnold and featured an arrangement of the iconic "Colonel Bogey" march at the beginning of the film. Real life veterans complained that they had never heard this whilst in the jungle and in any case hadn't had the breath to whistle but nevertheless, the music became an integral and instantly recognisable feature of the film.

Despite the misgivings of the veterans - both British and Japanese (who felt the film glorified Western civilisation) - the film was a huge critical and popular success, grossing $30.6 million in it's original release (against a budget of $2.8 million). At the 1957 Academy Awards, it won seven Oscars, for Best Picture (Spiegel), Best Director (Lean), Best Actor (Guinness), Best Adapted Screenplay (Boulle, later awarded to Foreman and Wilson), Best Music Score (Arnold), Best Film Editing (Peter Taylor) and Best Cinematography (Jack Hildyard). In addition, Sessue Hayakama was nominated for the Best Supporting Actor award.

The real bridge was not completely destroyed by commandos as in the film but was damaged by Allied bombing in 1945. Such was the success of the film, tourists came to Thailand to visit the bridge and because of this, the Thai authorities were forced to rename the location as "Khwae Yae" or "Little Kwai" to differentiate it from the location wrongly attributed by Boulle, who had never actually visited the location and had incorrectly assumed that it was located at Kanchanburi .

The real-life British commander of the camp alluded to in the novel was Lieutenant Colonel Philip Toosey of 135th (Hertfordshire Yeomanry) Field Regiment, Royal Artillery. He had actually been ordered by his superiors to evacuate from Singapore prior to the surrender but had refused to leave his men to captivity and so was taken prisoner alongside them. He was made commander of the camp at Tamarkan and courageously stood up for his men and complained to the Japanese of their ill-treatment, ensuring many beatings for himself. Eventually though, he was able to wrangle concessions from his captors by convincing them that the men would work better if they were more humanely treated. He maintained discipline in the camp and earned the respect of the Japanese, who considered Toosey's camp to be the best run on the entire railway, thus allowing him a certain amount of autonomy. Far from collaborating with the Japanese, Toosey covertly instructed that his men work as slowly as possible without endangering the lives of his men and also arranged the collection of termites, which would eat the wooden supports of the bridge.

There was a Japanese soldier at the camp named Saito but he was not a Colonel. Sergeant Major Saito was second-in-command at the camp and was considered to be a relatively humane individual not prone to the excesses of many of the other Japanese military personnel at the camp. After the war was over, Saito was due to stand trial for war crimes but Toosey spoke up for him, ensuring he would not have to stand trial and effectively saving his life. The two men corresponded after the war and when Toosey died in 1975, Saito subsequently travelled to England to visit his grave in Birkenhead. Saito was quoted as saying that Toosey "showed me what a human being should be and changed the philosophy of my life." When Saito died in 1990, his family discovered that he had converted to Christianity some years previously.

Our open-air screening was blessed with fine weather, if a little on the chilly side and an audience of over sixty people enjoyed watching the film beneath the South London stars. As always, thanks are due to Tim Barnes and his team at the Garrison Church. to all the volunteers from the Free Film Festival and of course, chiefly to those who supported the event on the night.

Posted by Steve Hunnisett at 16:51