Regular readers of this blog will be aware that starting back in 2014, we began to tell the story of Captain Richard E Evans who became the pilot of Bernard Law Montgomery's personal B-17 Flying Fortress, that Monty had "won" in a bet with General Eisenhower's Chief of Staff, General Walter Bedell Smith concerning the capture of of the Tunisian city of Sfax.
I was already aware of this bet and how by claiming his winnings, Monty had managed to upset pretty much everyone from Bedell Smith (who had wrongly assumed that Monty was joking) to the British Chief of the Imperial General Staff, Sir Alan Brooke, one of the few who could normally keep Monty under some sort of control. It was left to Ike to smooth things over and despite his annoyance at having to kow-tow to Monty, he recognised the importance of keeping him happy and so authorised the use of a Boeing B-17, complete with American crew to satisfy the British general's ego.
However, in December 2014, I had the honour of guiding Barbara (Bobbie) Kinnear and her husband John on a wartime walk around Westminster but before we had met, Bobbie had mentioned that her late father had been Monty's pilot. Bobbie expressed a certain amount of surprise that I was aware of this particular wartime oddity and when we did finally meet before our walk, I was delighted that she had brought along some copies of photos of her dad, proudly standing alongside a genial looking Monty. This photo, Bobbie explained, was one that her dad had unofficially entitled "Friends at Last" after a series of mishaps, mostly born of bad luck and the occasional misunderstanding, had threatened to sour the relationship between the two men.
Following our walk, we parted as friends and promised to keep in touch. Bobbie and John were as good as their word and apart from continuing in email contact, we have managed to meet up on their every subsequent visit to London in those pre-Covid days, with the friendship extending to John and Bobbie's wider family.
Before he passed away aged 87 in 2006, Colonel Richard E Evans (as he had become) began writing the story of his very full life but sadly, the work was not completed by the time of his death. Fortunately for us, Bobbie decided to complete the work but writing and editing isn't always an easy process, especially when one is trying to juggle it around work, family matters and life in general!
It is difficult to review a book of this nature without giving away too many spoilers but suffice to say, this is a well-researched and well written story that alternates between stories of Richard's childhood and growing up in the Tennessee Valley and Great Smokey Mountains and of his service in the USAAF and in particular, of his time as Monty's personal pilot, as well as his post-war service with Strategic Air Command.
The book is well illustrated with photographs both from the family collection as well as from the Imperial War Museum and other archives. There are also copies of some remarkable - and very sincere - personal correspondence between Monty and the then Captain Evans, which form part of an irreplaceable family archive.
From my own point of view as a military historian, the chapters covering Richard's service during the Second World War are of the most interest but those dealing with his young life in Tennessee are fascinating and give an insight to a life that this "Limey" can only imagine but which in some ways echo my own father's young life growing up in rural England before the war.
I commend this book to anyone with an interest in family or in military history, or for anyone interested in the often overlooked "human" side of Field Marshal Bernard Montgomery.
And why is the book called Richard Eager? Well, you'll have to buy it to find out!
I should point out that I did have a very small role in assisting with some of the research for this book but the writing and the editing is the work of Colonel Richard Evans and Barbara Evans Kinnear and theirs alone. 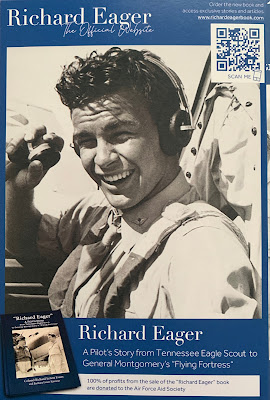 All profits from the sale of this book are being donated by the family to the Air Force Aid Society and copies can be purchased online from www.richardeagerbook.com
Posted by Steve Hunnisett at 13:51