I've been guiding regularly now since 2010 but have been interested in our wartime history for as long as I can remember and in that time, have come to appreciate that as well as the formal memorials and plaques commemorating incidents and events from the Blitz and beyond, there are so many more reminders that can be seen, often hiding in plain sight.

We've covered some of these in previous posts, such as surviving signage, bomb splinter damage and air raid shelters but today we're going to look at some of the quirkier and perhaps more subtle reminders of our wartime past.

We start at St Margaret's Church, adjacent to Westminster Abbey, a 12th Century place of worship that is sometimes called "The parish church of the House of Commons". 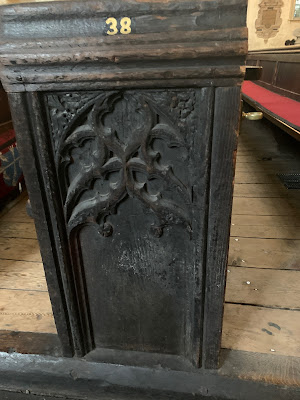 On 25 September 1940, an oil-incendiary bomb smashed through one of the stained glass windows on the eastern side of the church and started to burn inside the ancient building. The fire was soon extinguished but even some 82 years later, we can still see a plain window where there was once stained glass and scorched timber at the end of Pew 38.
Some reminders are so elusive that they can only be seen at certain times of the day, depending on the state of the tide in the River Thames. Walk from St Margaret's around to the Victoria Tower Gardens and if your visit coincides with low water, carefully look over the embankment wall and you will see rubble left over from when the river wall was breached by a high explosive bomb on the night of 16/17 April 1941. The wall over which you might very well be leaning was repaired using a concrete infill and it is quite fitting that this repair carries a City of Westminster green plaque commemorating Sir Thomas Peirson-Frank, the London County Council's Chief Engineer and the man responsible for that organisation's Thames Flood team, who were responsible for ensuring that speedy repairs were made whenever the river walls and flood defences were breached by the enemy's bombs and missiles.
Contiust a mile or so upstream on the Thames from the Palace of Westminster lies Vauxhall Bridge, the northernmost buttress of which carries splinter damage from a V-1 which like the rubble at Victoria Tower Gardens, can only be seen at low water. This too dates from the night of 16/17 April 1941, the second heaviest (and penultimate) raid of what we now call the First, or Night Blitz. 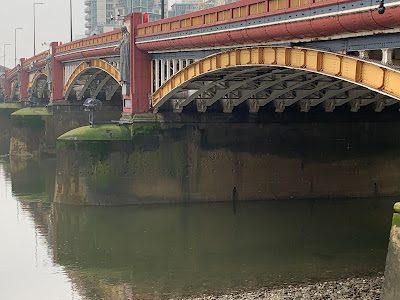 Continue north along Vauxhall Bridge Road until you reach Victoria Station. On the forecourt of the station, behind the new entrance to the busy Underground Station, one can see damage to the wall of the mainline station. This is not bomb splinter damage but instead is damage caused by a Luftwaffe bomber, the wreckage of which plunged to the ground on to the station forecourt on 15 September 1940. This was part of the Dornier 17 that was brought down when Sgt. Ray Holmes' Hurricane collided with it in the skies over central London on the day that is now commemorated as Battle of Britain Day. The Dornier, which had already been abandoned by it's surviving crew members, was flying on autopilot, and apart from two dead crew, contained a full bomb load, most of which flew from the bomber during its uncontrolled descent.
The contemporary photo shows the wreckage being guarded by soldiers and police to discourage would-be souvenir hunters. The new entrance to the Circle and District Line platforms stands almost exactly where the wrecked "Locks and Cutlery" shop once stood.
In the modern photographs, we can see the masonry of the station wall, which although recently cleaned, is still disfigured by the impact of the German bomber on that late summer lunchtime. 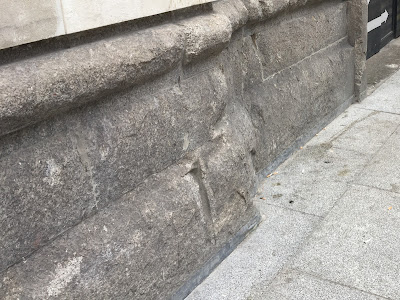 In the next edition, we shall take a look at similar reminders of our wartime past elsewhere in the capital.

Please note that all photographs in the above article are the property of the author and may not be used elsewhere without my express written permission. Offenders will be pursued ruthlessly!

Posted by Steve Hunnisett at 17:25