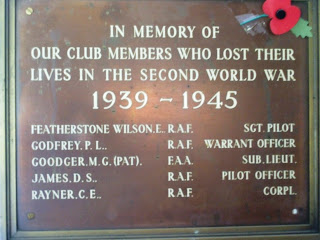 Despite living in southeast London, I am a member of a cricket club in Middlesex. I won’t bore you with the reasons for this self-imposed weekly commute across London but suffice to say, my history hobby has crossed over into my sporting leisure time as well.

Inside the pavilion of Ickenham Cricket Club is an unassuming brass memorial plaque to the five members of the Club who laid down their lives during the Second World War. Soon after joining the Club I began to think a bit more deeply about these men; who they were, the circumstances of their deaths and how the awful realisation of this must have affected those left behind – the parents, wives, girlfriends, team mates and friends. Although I didn't realise it at the time, this interest in the men behind the names on the plaque was shared by the Club Chairman, so between us over the past year or so, we have tried to delve into the past to discover who these men were and how they ended up making the ultimate sacrifice.

Apart from the everyday stress of living through the Blitz, many Londoners and many civilians from every part of the United Kingdom shared with civilians on both Allied and Axis sides the additional torment of having a loved one serving in one of the fighting services. These parents, wives and girlfriends would go about their everyday lives with the secret dread of receiving a telegram or letter that began in the case of British service personnel with the words “The Secretary of State for War regrets……”

Of the five names on the Ickenham plaque, four of them were flyers – one with the Fleet Air Arm and three from the RAF whilst the other, despite misleading information on the plaque was a Corporal in the British Army who died at El Alamein. For the purposes of this article, we shall concentrate on just one of those names, although this is in no way meant to detract from the other four men who perhaps we shall return to at a future opportunity.

Dennis Stephen James was born on 26th August 1922, the son of Mr & Mrs Frank James of Uxbridge, Middlesex. He was educated at Bishopshalt School, Hillingdon from 1934-39 and was a keen sportsman who played football and cricket for his school and was subsequently a member of Uxbridge and later Ickenham Cricket Clubs, for whom he was described as a very good middle order batsman.

Aeroplanes and flying always seemed to fascinate him. His mother recalled him seeing a plane flying over the family home when he was about 4 years of age and Dennis saying to his mother, “One day, Mummy, I shall drive one of those!”

This interest in flying increased and whilst at school, he made a study of the subject and also that of aircraft recognition and read every book on the subject that he could get hold of.

It was no surprise that the day after his 18th birthday he volunteered for the RAF and was called up for service in September 1940 and after his basic training was sent to Southern Rhodesia for his flying training and where he also gained his Sergeant’s stripes. Although he originally qualified as a bomber pilot, he volunteered to make the switch to fighters and had been the youngest member of every squadron to which he was posted.

By July 1942, Dennis was serving with 122 (Bombay) Squadron, based at RAF Fairlop as part of the famous Hornchurch Wing under the overall command of Wing Commander Brendan ‘Paddy’ Finucane, who was one of the ‘Few’ from the Battle of Britain and one of the RAF’s aces with 32 kills to his name.

In 1942, RAF Fighter Command was on the offensive, making fighter sweeps known as ‘Rhubarbs’ over German occupied Northern France and on 15th July, 122 Squadron was part of a very large scale ‘Rhubarb’ against a German Army camp near Etaples in the Pas de Calais along with 81 and 154 Squadrons. Sergeant Pilot James was flying Spitfire Vb BM329 when it was brought down by flak near Boulogne. The Squadron’s War Diary reports that his colleagues did not see what happened to Dennis’s aircraft but he did not form up at the rendezvous point prior to returning to England.

It was subsequently discovered that Dennis’s Spitfire was hit by flak but unfortunately he had crashed without having baled out. He is buried at the Commonwealth War Graves Cemetery at Boulogne Eastern which is the final resting place for 5,743 British & Commonwealth casualties from both World Wars.

Two other Spitfire pilots were lost during the same operation, including Dennis’s Wing Commander, Paddy Finucane who crashed into the sea and of whom Dennis was intensely proud to serve under. Indeed in one his last letters home, Dennis had written an enthusiastic letter in which he stated his pleasure at serving under such an illustrious commander.

One can only imagine the anguish that Dennis’s parents felt when they received the dreaded telegram. They also received a letter from his Squadron Leader stating how proud of him he was and how he and all his friends missed him.

Squadron life went on. The day after the operation over Etaples, 122 Squadron moved from Fairlop to Hornchurch and a party was held to celebrate the fact at which no doubt a glass or two was raised to Dennis’s memory and to the others lost. According to the Squadron War Diary "It was – in so far as this chronicler can remember – an excellent party!”

No doubt it was an excellent party – squadron colleagues couldn’t afford to get too close or too sentimental otherwise they wouldn’t be able to function. It would be a case of ‘Old so and so bought it’ and then they would get on with the grim business of prosecuting the war knowing full well that they could be next but trying not to think about it too closely.

Dennis Stephen James’s parents would not have known or cared about any of this – they had lost a son, in common with so many other parents in this long and terrible conflict.