Is Your Journey Really Necessary? 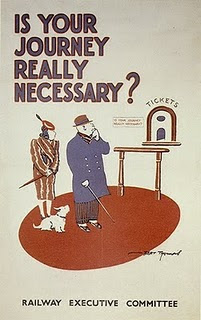 This was the question asked of all potential travellers during wartime before they set out on their journey. During the Second World War, the British public transport network was hard pressed as never before or since. Whilst the railway network was far larger than that of today, the companies were under manned having lost many men to the fighting services and as the 'Phoney War' period progressed into the Blitz, the network was frequently disrupted by enemy action with railway and tram lines blocked, stations bombed and bus routes diverted or suspended. But our railway and bus companies rose magnificently to the challenge time and time again and in this article, we shall examine one or two examples as to how they coped.

The 'Big Four' railway companies, the Southern Railway, Great Western (GWR), London & North Eastern (LNER) and the London, Midland & Scottish (LMS) together with the London Passenger Transport Board were all effectively nationalised on 1st September 1939 when they were placed under the control of the Railway Executive Committee. In practice, the day to day management of these companies remained under their own control with the Committee basically forming a co-ordination role ensuring that the companies made the greatest possible contribution to the war effort.

The first contribution came on the same day as the formation of the Railway Executive Committee, when the mass evacuation of schoolchildren was put in place. In the space of four days, over half a million people, mainly children but also expectant mothers, the blind, the mentally ill and the disabled were moved out of London. Many of them by double decker buses and Green Line coaches but many more by train. Some were moved only relatively short distances. For example, many Bermondsey schoolchildren were evacuated to Worthing in Sussex, with those from Greenwich and Woolwich being sent to Reigate in Surrey. Some went much further afield to places such as Torquay and Newton Abbot in Devon where life to the children must have seemed strange indeed in comparison to the crowded and noisy streets of London. There was even a scheme to evacuate children to Canada by sea but this was stopped abruptly when one of the evacuation vessels, the 'City of Benares' was torpedoed and sunk with heavy loss of life. This particular method of evacuation falls outside the scope of this article but perhaps we shall return to it at a later opportunity.

The next logistical challenge came in May 1940 with the retreat of the British Expeditionary Force and their French allies to the Channel ports. The German advance had occurred so rapidly that the Allies had fallen back, at times in some disorder to Calais, Boulogne and once these ports had fallen, to Dunkirk. There were also later evacuations from ports further south such as St Nazaire, Brest and Le Havre but it is the evacuation from Dunkirk that has become etched in history.

On 21st May 1940, the Southern Railway's Operations Superintendent had attended a meeting at which he was asked to make provision for the movement of 300,000 troops to be disembarked at various South Coast ports. As a result of this meeting, all four of the railway companies were asked to provide 186 ten coach trains for the purpose of moving these troops. The Southern provided 55 of these trains and all of them were carefully marshalled onto the down lines to the south and southeast of London. The movement of troops began on the 21st May on a modest scale when 24,000 soldiers were moved using the initial 55 special trains but it was on the 27th May that 'Operation Dynamo' as the evacuation was called began in earnest. It was to continue for another nine days and the troop movements involved make truly staggering reading. Instead of day trippers, the station at Margate handled 38,000 soldiers with Ramsgate dealing with 43,000 and Folkestone taking 35,000 troops and 9,000 civilian and other evacuees. However, it was Dover which bore the brunt, despatching an amazing 181,000 soldiers in 327 special trains. All of these trains were stopped alternately at either Headcorn or Paddock Wood where the soldiers were fed, watered and provided with additional clothing. This was a remarkable effort; the Southern Railway had helped to rescue an army.

The fall of France brought London within range of the Luftwaffe's bombers and once the Blitz started, the railway companies and London Transport faced new problems and new dangers in keeping their services running. The use of London Transport's Underground stations as public shelters is now well known but perhaps less well known is the fact that the Government had originally intended that the Tube should not be used for public air raid sheltering purposes at all. In the event, it was sheer common sense on the part of the general public that dictated that they should seek to use the system and faced with overwhelming numbers of Londoners seeking refuge, the authorities could do nothing to stop them. Faced with this situation, the Tubes were quickly adapted as shelters, with 79 stations being used for this purpose as well as disused parts of the system and also extensions that had not yet opened for use. These shelters were equipped with chemical toilets, bunks, medical facilities and canteens and proved very popular with the locals. An early problem and one which showed human low life at its very worst was the appearance of ticket touts, who purchased tickets for the shelters and then tried to sell them on to the genuine shelterers at vastly inflated prices. These people were dealt with harshly when caught but the problem was never fully suppressed. The Tube was not completely immune from bombing - Bounds Green, Trafalgar Square and Balham Stations were all hit with some loss of life - but for the most part the Tubes were safe and secure refuges for Londoners.

Above ground, there were many tales of heroism from railwaymen and women. The night of 10th/11th May 1941 saw the last big raid on London and also the heaviest. At Bricklayers Arms Depot in southeast London, Driver Len Stainer and his Fireman, Jim Foote had just signed on for duty to take the 12.53 am train from Cannon Street to Dartford. En route to Cannon Street, they had stopped their engine at Borough Market Junction in order to clear incendiary bombs from the line before proceeding. If this wasn't enough, they then continued into Cannon Street and arrived just as bombs began to fall on that station. A large fire was started and Driver Stainer and Fireman Foote, together with the crew of another locomotive decided to pull out of the station in an attempt to save their trains from catching fire. As they moved onto the bridge over the River Thames, the men heard the sound of even more bombs coming down and the men instinctively ducked for cover on the footplates of their engines. It transpired that a bomb had struck the boiler of the other crew's engine, turned part of their train over and blasted their own engine. Fortunately, the crew of the other engine were unhurt but in an act of incredible bravery, Len and Jim then tried to extinguish the fire on their own train before being beaten back by the intense heat. Len Stainer then uncoupled his engine from the burning train and pulled back across the bridge to the south side, where the four men watched the station burn until dawn. To quote Len Stainer "It was just as if Hell had been let loose."

Later in the war, although the bombing had diminished, the railways played their part in the invasion of Europe by running troop trains galore and transporting all manner of ammunition and equipment to the Channel ports in preparation for for D-Day. Even after the invasion, locomotives and personnel were sent across the Channel to France to get the ruined French rail network up and running once again.

Even then, it was still not quite all over as the Terror Weapons in the shape of the V-1s and V-2s caused further death and disruption, especially in London and the Southeast but finally victory came in May 1945.

It should be remembered that even on VE Night, there were still over 12,000 people sheltering in London's Tube stations and the Deep Level Shelters but the final happy duty for the beleaguered transport system was to bring home the evacuated schoolchildren from the country back to London. The war was over and a long period of rebuilding and re-equipping was to follow.