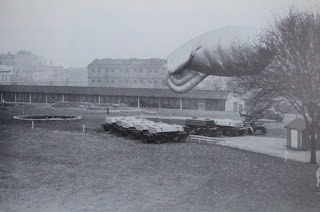 With cricket in the news due to the victorious exploits of the England team in Australia, perhaps now is a good time to write about Lord's Cricket Ground in wartime, then as now headquarters of Marylebone Cricket Club (MCC), English cricket and surely the spiritual home of the World game, as this was and remains the ground at which every player around the World wants to play.
In 1939, this famous old ground had already been in existence since 1814 and was well established as the home of cricket. The domestic cricket season had already come to an abrupt end on 1st September 1939 - two days before the declaration of war - and the ground was becoming a hive of activity as many of the buildings on the adjoining Nursery Ground were requisitioned by the RAF. This part of the ground was to be used by 903 Squadron Balloon Barrage, part of London's defences against low flying enemy aircraft. At the opposite end of the ground, many of the buildings at the Pavilion End were used as the RAF's No. 1 Aircrew Reception Area, where many new recruits had their first taste of service life with many of them later making the ultimate sacrifice. Today a small unobtrusive bronze plaque on the pavilion records this fact. The ground was also used as Auxiliary Fire Station 11V of the AFS and the excellent Lord's Museum today contains some wonderful photographs of the usual collection of converted London taxis converted into makeshift fire engines parked at the perimeter of the playing area.

Although many test cricketers who had previously graced the hallowed turf such as the Middlesex players Bill Edrich, Jack Robertson and Denis and Leslie Compton as well as other England players like Len Hutton and Hedley Verity of Yorkshire had left their counties to join the fighting services, cricket at Lords still carried on, albeit in a reduced form and with a leaning towards inter service matches. These matches were of huge importance, not just for the morale of the public but also to demonstrate that whatever the Nazis could throw at Great Britain, cricket and cricketers could not and would not be intimidated in the face of tyranny.

One of these inter service matches was tinged with tragedy - a match between the Home Guards of Surrey and Sussex, held on July 23rd 1942 was abandoned when Andrew Ducat, the former Surrey & England cricketer (and England footballer) died at the crease from a heart attack whilst batting for the Surrey Home Guard. He had been retired from cricket since 1931 and was aged 56 at the time of his death. He had become a sports journalist and his tragic record remains that of being the only player in history to die during a match at Lord's.

ce the sadness of this event, in 1944 came another incident which showed both defiance and humour in equal measure. On July 29th 1944, the Army played the RAF in a representative match and whilst Middlesex and England batsman Jack Robertson was at the wicket batting for the Army, the unmistakeable sound of a V1 Flying Bomb could be heard approaching the ground. To make matters worse, the engine cut out and for a short time it looked as if the missile would land on the cricket ground. The players threw themselves to the turf, with one of them taking shelter behind the stumps! Fortunately for all concerned, the doodlebug fell harmlessly short of the ground in Albert Road, near Regent's Park. Starved of 'live' sport these matches were always well attended by Londoners and off duty service personnel and when play resumed, Jack Robertson hit the second ball after the re-start - a long hop from Bob Wyatt - for six. Not surprisingly, the crowd erupted at this show of defiance from the Middlesex and England opening batsman.

The famous ground was not always immune from damage. On October 16th 1940, at the height of the First Blitz, an Oil Bomb fell onto the outfield at the Nursery End near the sightscreens. When the bomb burst open, it revealed the photograph of a young German officer, across which was written the message 'With Compliments.' The only other direct damage sustained was when one of the houses owned by MCC, 6 Elm Tree Road, which adjoined the ground was destroyed by a direct hit also during 1940.

There were other incidents such as the time when one of the resident barrage balloons went out of control and wrapped it's cable around Old Father Time, bringing the iconic weather vane tumbling down from his lofty perch onto the seats of the Grand Stand. There was also an incident straight from the script of 'Dad's Army' when the local Home Guard was reported to the MCC Committee for using the garden of another of the Club's houses, this time at 2 Grove End Road, for 'bomb throwing practice.'

As the war went on, some of those illustrious names who had graced Lord's before the war made the ultimate sacrifice and were never to return. Kenneth Farnes, a fast bowler of Cambridge University and Essex had first played for England in 1934 but was still only 30 when his plane crashed on a night flying exercise in 1941.

Then, in July 1943 arguably the most famous English sportsman to fall in the Second World War, Hedley Verity of Yorkshire and England was killed whilst serving with the Army in Sicily. Aged 38, he was a Captain in the Green Howards and was leading his men in an assault on a German strongpoint when he was struck in the chest by mortar shell fragments. His men last saw him on the ground, his head being cradled by his batman and murmuring 'Keep going, keep going and get them out of that farmhouse.' He died a few days later on 31st July 1943 in an Italian POW Camp Hospital at Catania - his last words were said to have been 'I think I have played my last innings for Yorkshire.' An excellent off spinner, Verity had a special connection with Lord's, having taken 15 wickets against Australia in the 1934 Ashes test match at the ground, including 14 in one day and dismissing Don Bradman twice in the game, which incidentally was the only time in the 20th Century that England beat Australia in a Lord's test match.

In August 1944, Maurice Turnbull, who was a fine all round sportsman, captain of Glamorgan, an England cricketer and who had played rugby, hockey and squash for Wales, was killed instantly by a sniper's bullet at Montchamp in Normandy, aged 33 and with probably many more years of international cricket ahead of him after the war had fate not intervened.

In May 1945, when victory in Europe was won, the Secretary of MCC, Sir Pelham Warner arranged what became known as the five 'Victory Tests' - not test matches in the conventional sense - but three day matches, England v Australia, three of which were played at Lord's - the others were at Bramall Lane, Sheffield and at Old Trafford, Manchester. These matches were played in front of huge crowds who had been starved of cricket and who were treated to a festival of attacking, open cricket, played in a tremendous spirit. The series was drawn two matches each, with one drawn match and the exuberant play seemed to reflect the joy and relief that the players and spectators alike felt on emerging from the war into a hopeful peace. Cricket had survived and for those players who had served in the war, the game was put into perspective by the great Australian all-rounder Keith Miller, who had served on operations over Germany as a Mosquito pilot in the Royal Australian Air Force and who once when asked about the pressures of playing test cricket famously replied 'I'll tell you about pressure. Pressure is a Messerschmitt up your arse, playing cricket is not!'