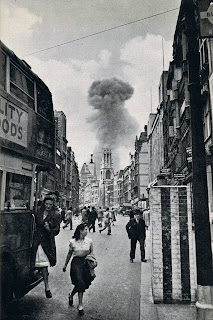 13th June 1944: The Allies had been ashore in Normandy for six days; the invasion of Europe was under way and the Germans were being inexorably pushed back yard by yard out of the territory they had invaded some four years previously and although the Allies were not to know it at the time, the European war had less than a year to run its course.

London at this time was a city licking its wounds. The great raids of 1940/41 were now but a memory but large swathes of the capital were still in ruins and would remain in this state for many years to come – in some cases until the 1960s and 70s and although the raids of the ‘Baby Blitz’ had been nowhere near as intense, they too had rendered large areas of the city uninhabitable. So the news of the invasion had been greeted with cautious optimism by Londoners, perhaps the end was in sight and perhaps there would be no more bombs.

It was not to be; at 04:25 the Grove Road railway bridge at Bow, in London’s East End was struck by a large explosion. The bridge and the railway track were badly damaged, several houses were badly damaged and six people were killed. Moments before the explosion, eyewitnesses had heard what vaguely sounded like a crashing aircraft and had found remnants of what looked like a small aeroplane amongst the wreckage but could find no trace of a pilot. There was no pilot, for what had caused the explosion had been the first of Hitler’s Vergeltungswaffe or Vengeance Weapons. Officially known as the Fieseler Fi103, these weapons were effectively the first form of cruise missile and were launched from fixed ramp sites in the Pas de Calais area of France and had been developed by the Luftwaffe at the Peenemunde site where the second of the Vengeance Weapons, the terrifying V-2 rocket was also under development. Thanks to the bravery of agents on the ground and also the actions of the RAF’s reconnaissance pilots, the site had been bombed by the RAF and the programme set back by six months or so but the bomb that fell on Grove Road was amongst five launched that night; in fact the first one had landed in Kent shortly before the one that fell in Bow but after this first wave of attacks, nothing happened for two more days, as if these first bombs were finding the range.

The Civil Defence records for these first incidents describe them as ‘PAC’ or Pilotless Aircraft, soon afterwards the description changes to ‘FLY’ for Fly-Bomb and this is what the majority of Londoners called them – Flying Bomb, although the media soon christened them ‘Buzz Bombs’ or ‘Doodlebugs’, whilst some ruder citizens called them Farting Furies due to the distinctive rasping sound made by the pulse jet engine.

The V-1 was a sophisticated piece of engineering, which was powered by a pulse jet engine capable of giving a speed of 400 mph and was guided by a gyrocompass autopilot system and designed to ensure that the engine would cut out when it reached its target – usually London – by an odometer which was powered by a small anemometer in the nose. Londoners would soon learn to rush for cover when the engine cut out and the brief eerie silence which followed was the only chance people on the ground had to avoid death at the hands of the 850 kg Amatol warhead in the ‘Robots’, which was another popular name in the media for the new weapons.

Despite what in 1944, was the futuristic nature of the V-1, they could be defended against. The capital’s anti-aircraft guns were quickly redeployed from the parks and open spaces in and around London to the south coast of England and the Thames Estuary, so as to intercept them as they crossed the coast. The new proximity shells and the radar guidance of the guns were extremely effective in bringing down the robots – on average, one shell in every hundred fired brought down a buzz bomb. The defences were arranged in layers; for any V-1s that evaded the guns, the next layer was the balloon barrage, which had also been moved from London. These large balloons were tethered with thick steel cables which could tear the wings from a low flying aircraft but in the case of the V-1s were largely ineffective; the leading edges of the wings of the doodlebugs had been fitted with cable cutters and fewer than three hundred were thought to have been brought down this way. The next line of defence was the aircraft of RAF Fighter Command. The later marks of Spitfire, the new Hawker Tempest and the even newer Gloster Meteor jet fighters were more than capable of keeping up with the V-1s, although it took considerable nerve to fly behind a flying bomb with a near one tonne warhead and then to pump cannon shells into it for the resulting explosion could quite easily take the attacker with it as well. Some pilots preferred to fly alongside the V-1 and disrupt the air flow beneath the wings by placing the wing of the fighter beneath the wing of the robot without touching it, thus throwing the gyro stabilizer into confusion and causing the weapon to pancake into the ground. This manoeuvre also required considerable skill and courage but the ‘anti-diver’ patrols, combined with the anti-aircraft guns and balloons, as well as the false information about the fall of the missiles fed to Germany by double agents, most notably Juan Pujol, aka Garbo, all managed to ensure that about 7,500 of the almost 10,000 launched at London never reached their target.

Despite all these counter measure, bombs still got through and the worst incident was to occur on the first weekend of the attacks. It was Sunday June 18th and the regular service in the Guards Chapel in Birdcage Walk was under way and at 11:20 Colonel Edward Hay was reading the lesson at the lectern when at that instant, the chapel was obliterated in a massive explosion. A V-1 had struck with a direct hit and Hay, along with 121 others was killed instantly. The Guards Chapel was in ruins; in places the rubble was ten feet thick and it took two days to dig out all of the victims; 141 others were seriously injured but miraculously, the Bishop of Maidstone who had been conducting the service was totally unhurt. The portico of the ruined chapel which had sheltered the bishop and which was the only part of the building to survive, forms part of today’s rebuilt Guards Chapel which contains a Book of Remembrance for those lost in the disaster. Another shocking incident in Central London came a few days later on the 30th June, when Adastral House, home of the Air Ministry in the Aldwych suffered a V-1 strike; 48 people were killed, mainly office workers and the photograph of the immediate aftermath, shown above, shows an ominous mushroom cloud rising above Fleet Street as Londoners hurry about their business.

Incident after incident followed with depressing regularity and it became imperative for the invading armies in France to overrun the Pas de Calais in order to bring the attacks to an end. By the end of September 1944, this had been achieved and the last of the regular V-1 attacks was over. Over 6,000 civilians had been killed in London alone with a further 17,000 injured. Although the fixed launch sites had been overrun, V-1s were still launched from converted Heinkel 111 bombers, mainly at Antwerp, which was hit by a further 2,448 missiles between October 1944 and March 1945. The V-1s had finished with London but worse, much worse was to come in the form of the V-2 rockets, the first of which was to fall in Chiswick on 8th September 1944.

Although these rockets were to fall on England until late March 1945, the final enemy activity of the Second World War on British soil occurred from an air launched V-1, which fell harmlessly in open countryside in Datchworth, Hertfordshire on 29th March 1945, barely six weeks before the end of the war in Europe.