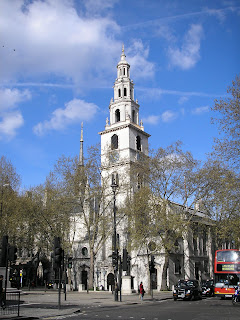 This week we have a guest blogger in the shape of Dave O’Malley from Vintage Wings of Canada, which is an aviation museum and charitable organisation based at Gatineau Ottawa Airport, Quebec dedicated to the preservation, restoration and maintenance of classic aircraft from the early history of powered flight. Dave also produces an excellent blog called 'Vintage News' at www.vintagewings.ca and when in Canada, a visit to this wonderful museum is a must.

No one has ever accused me of being a religious man. Not in the last four decades anyway. Perhaps it was all those years as an altar boy trudging to church through ice pellets and snow squalls at 5 a.m. during a black-as-night Canadian winter morning, my heavy boots squeaking on the hard snow. Perhaps it was the hundreds of masses I served in an overheated church where I knelt, rang hand bells, yawned and teetered on the edge of sleep while Monsignor Costello droned on in Latin for the benefit of one lonely lady and the Organ Master.

On two occasions in those days, I was stopped in the frozen, black, suburban void of Elmvale Acres two hours before sun-up by the single cherry-red light of a prowling police cruiser. What, in God's name, I was asked, was a freckle faced 12-year old kid in duffel coat, ear muffs and Second World War flight boots doing in a world that belonged to sidewalk sanders, milkmen and officers of the law?

One day about 40 years ago, much to the silent displeasure of my father, I stopped going to church alltogether, and I have never entered a church since that day with the intention of praying or finding solace and contemplation. I have never since that day felt a spirit dwelling in any church that I have visited for weddings or funerals. Perhaps there was a spirit, but I have not been able to feel it.

That all changed last fall when visiting London on Vintage Wings of Canada business. One of the places I was hoping to visit on my down time was a small (by Westminster standards) church buried deep in one of the most historic sectors of London. The Church of St Clement Danes first came to my attention while watching a video on the Battle of Britain Memorial Flight. During that documentary, the Flight was honoured with their unit crest being carved in slate and embedded in the floor of this unique and beautiful church. I had never before heard of this practice, this place of worship, this glorious tradition. I made it an imperative to visit while in London.

The site of St. Clement Danes on the Strand has been a place of worship for more than 1,200 years and the church structure that stands on it now has been here for 330 years. The main structure was designed by none other than Christopher Wren, the best known and highest acclaimed architect in British history. After the Great London Fire of 1666, Wren was tasked with the rebuilding no less than 51 razed churches in the City of London alone. One was St. Clement Danes, while one was his the crowning masterpiece of his life's work - St. Paul's Cathedral. Having a university degree in architecture, I was doubly excited to behold one of his buildings for the first time.

While a religious edifice of some kind has endured here since 600 years before Columbus discovered the New World, in all that time none of the buildings found here were ever draped in the glory, honour, sadness and history now found contained within its present four walls. But to get to that glory, first St. Clement Danes had to face its own trial by Satan's fire and a scourging by the whips of blasted metal from the angels of darkness.

On the night of the 10th of May, 1941 and into the morning of the 11th, the St. Clement Danes on the Strand was ravaged by direct hits from incendiary bombs and viciously lashed by huge chunks of shrapnel from near misses of high explosive aerial bombs. Satan's dark angels in the form of Hitler's Heinkels dropped load after load on central London in what was to be for all intents and purposes the last night of the Blitz.

On this night, which was to be the last major attack on London, the Luftwaffe amassed 550 bombers. When the sun came up on the 11th of May, St. Clement Danes was a smoking shell and many other important buildings were destroyed or seriously damaged including The Houses of Parliament, the British Museum and St. James Palace. The death toll that night was 1,364 Londoners killed and 1,616 seriously injured. After the "All Clear", the steady and determined British set to work to clear the rubble, bury their dead and get back to the business of defeating the Evil Empire.

After the war, the ruin that was Wren's beautiful and elegant work was left until its future could be secured. Because the church was burned but still standing as a result of the German attacks, it came to symbolize, along with the pilots of the Battle of Britain, the strength of the British resolve in the face of dire circumstance. And because it was damaged as the result of a to-the-death aerial war that was eventually won by the Royal Air Force, the church was handed over to them in 1953. Following an appeal for funding that secured £ 250,000 and reached around the world to the airmen and air forces of the Commonwealth, the church was restored to its original Christopher Wren beauty.

In 1958, St. Clement Danes was consecrated as the Central 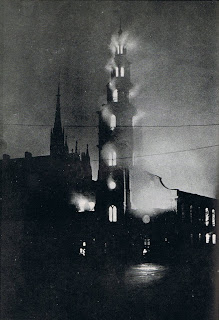 Church of the Royal Air Force and opened by Her Majesty Queen Elizabeth II. Today the church stands as a living and growing spiritual tribute to the sacrifices of the airmen of the Commonwealth during the Second World War and to the continuing sacrifices of the RAF to this very day.

Every inch of the walls, floor and ceiling is a memorial of some kind to airmen. Above the balcony hang a number of stood down unit colour standards. Below each lower window is a glass case above which stands an eagle and in which sits a book of remembrance - one airman to a page. The 8th and 9th US Air Forces stationed in the United Kingdom during the war years are included with a shrine. The whole ground floor is a sweeping plain of white stone patterned by a seeming endless galaxy of 1,000 insets of Welsh slate in the shape of RAF unit badges. A special stone and brass mosaic at the entrance has the crest of the RAF surrounded by eight crests of the Commonwealth air forces (some of which no longer exist), while another in the left aisle has the Polish eagle surrounded by the armorial symbols of the sixteen Polish squadrons of the RAF during the Second World War.

Gift tributes found throughout the church include: the altar from the Netherlands, the lectern from the Royal Australian Air Force, a chair from Douglas Bader to the memory of his first wife - Thelma who died in 1971, a chair honouring surgeon Sir Archibald McIndoe and The Guinea Pig Club, and a processional cross from the Air Training Corps. The organ on the balcony at the rear was a gift from the US Air Force. The basement crypt has been made into a quiet and secluded chapel, with an altar from the Netherlands Air Force, a baptismal font from the Norwegians, and a candelabrum from the Belgian Air Force

The carillon bells were hung in 1957 with a big bass bell nick-named “Boom” in commemoration of Marshal of the Royal Air Force Hugh Trenchard, GCB OM GCVO DSO who organised the RAF from its inception. “Boom” Trenchard had just died the year before the bells were hung.

I suppose that part of my problem with the spirituality of churches stems from inside myself. If unable to open a door inwards I could hardly expect to access whatever lay behind the doors of these buildings. There was of course this one very powerful exception. Walking down the Strand from Trafalgar, the knowledge of where I was and of what happened there 70 years ago was like a crowbar to the jamb of that inner door. The closer I got to the church, the more that door was forced open and as I walked through the doors of St. Clement Danes, some huge wind of release threw that heavy gate solidly back. This church was clearly different and so was my openness.

Somewhat soiled and grey on the outside and pockmarked by shrapnel, the interior is a sunlit sanctuary that begs for silence, encourages contemplation and awards the visitor with spiritual warmth. There is a spirit of triumph and yet there is a lesson on human failure here too - how they blend so well is a mystery. Gold leaf, carvings, military colours, holy names and an ocean of squadron crests speak to glory, history and accomplishment, while the totality of the sacrifice of airmen and women during the wars of the 20th century hangs like smoke in the air. The place is a strange mixture of uplifting, soaring euphoria and heavy, crushing sadness. These equal and opposite emotional effects serve to keep the visitor solidly and powerfully centred within the walls and vaulted ceilings of St. Clement Danes

When we left the sanctuary and silence of that beautiful church, we came out to a sunny day and a bustling, lively city. London is a proud and in my opinion, a very happy city. She has endured much over the centuries, and suffered most during Second World War. But she is as alive today as she has ever been, thanks in part to the Royal Air Force. It is fitting then that a church so wounded in the conflagration would rise from the ashes of one of London's worst, yet defining, moments and become the vessel into which much of the sadness was poured. I have seen and heard how people who suffer great personal loss need closure - a part of that lost person, a memorial, a place to grieve, to come to terms with the reality of the loss so that life may resume and the sun can shine. St Clement Danes represents closure for a city, a nation, a commonwealth and its alliances and for those who visit an individual. The rebirth of St. Clement Danes represents a moment of spectacular creativity by the Royal Air Force, one for which I offer thanks from Vintage Wings of Canada.

I'm not going back to church on a regular basis anytime soon to be perfectly honest, but I thank the RAF of all people, for a glimpse at what faith must be like. Me... I will put my faith in the strength of our heroes, armed forces, first responders, hard workers, volunteers, givers, team players and history makers - so many of whom hold faith in a God I have yet to find.

As a footnote to Dave's excellent and thought provoking article, perhaps we should mention the Reverend William Pennington-Beckford, who was appointed as Rector of the church in 1910. It is fair to say that Beckford loved this church and amongst his many duties, he oversaw the annual ceremony of the presentation of oranges and lemons to local schoolchildren, for St Clement Danes is the 'Oranges and Lemons' church of the famous nursery rhyme. In the photograph below, he can be seen in the centre background watching the ceremony. 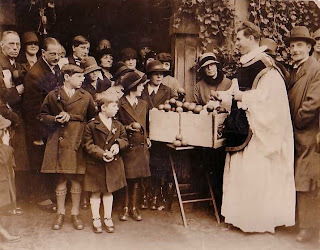 Beckford, by now an elderly man but still the rector of St Clement Danes, stood watching in tears as his beloved church was bombed and burnt to the ground. Within a month, he was dead; some said he died from a broken heart.