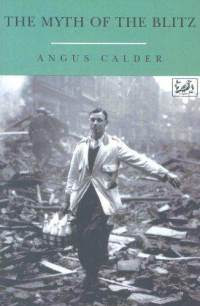 A blog of this nature, although we try to be comprehensive and accurate in the subjects covered, cannot compete with the depth of knowledge and sheer detail that goes into many of the books written on the Second World War.
Such books began to appear immediately the war was over and continue to be written to this day. As someone who guides Blitz-related walks around London and as a Blitz-related blogger and writer, I am often asked what books I would recommend to someone starting a wartime library or to someone who has even a passing interest in the subject. Both Neil and I are very careful to add a ‘Published Sources’ footnote to our blog and whilst our articles are by no means a ‘cut and paste’ job, we are always very aware of the work that goes into producing any piece of writing and are happy (and proud) to acknowledge our sources and inspirations.

Therefore, in answer to the oft asked question, here are my thoughts on the very best of Second World War writing. By its very nature, such a list is subjective and I would welcome the comments of our readers as to their favourites.

As can be imagined, many books were written once the Blitz was over and in the immediate aftermath. These books are still of tremendous value, although some of them are written in the style of their time which can sometimes be seen as politically incorrect and were also written at a time when some of the secrets of the war were still to be revealed.

Of books written whilst the war was still in progress, Front Line 1940-41, published by HMSO in 1942 is a remarkable pictorial study of the Blitz which was issued as a tribute to Britain’s Civil Defence services. Probably the best of the contemporary histories is Carry on London! written in 1941 by Ritchie Calder, who wrote for the now defunct newspaper The Daily Herald and later became Science Editor of the also long disappeared News Chronicle. He was also the father of the author and historian Angus Calder, of whom more later. As might be expected, it is written in a journalistic style and concentrates on the trials, tribulations and triumphs of the ordinary people.

Of the books written in the immediate aftermath of the war, easily the best written in my opinion is Westminster in War by William Sansom and published in 1947. During the war, Sansom was a full time London firefighter, serving initially in the Auxiliary Fire Service and later the National Fire Service, who had several close calls, especially on 29th December 1940, when he narrowly avoided being buried by falling masonry on the night the City of London was firebombed. Well qualified to write on his subject, Sansom became a full time novelist, short story and travel writer post-war and this book stands up well to this day.

Specific raids have also been well covered; The City That Wouldn’t Die by Richard Collier, published in 1959 concentrates on the last night of the Blitz – 10th/11th May 1941 – and is written in a compelling style as befits a journalist with the Daily Mail amongst other publications. Collier skilfully selects various participants, both on the British and German sides and follows their stories through this night of nights. Blitz, by M J Gaskin, is a much more recent addition to the ranks of the publications, not appearing until 2005 and covers the night of 29th December 1940, the great fire raid on the City of London and is written in a similar style to Collier’s book, concentrating on the stories of many of those involved during this raid, cleverly interweaving their stories. Margaret Gaskin wrote this book because she was initially puzzled why so much of the history of the City of London was seemingly punctuated by the recurring date of 29th December 1940 and simply wanted to get to the bottom of the story, which she has done supremely well.

Of general histories of the Blitz, there are several that stand out; Backs to the Wall by Leonard Mosley published in 1971 deals with the general subject pretty well and uses the by now tried and tested methods of concentrating on specific people who were involved and following their stories through the war. This is a fine book but suffers, in this writer’s opinion due to the author’s political viewpoint clouding his judgement occasionally. For example, he accuses Lord Alanbrooke, Chief of the Imperial General Staff, of being out of touch with the situation in London. This is patently incorrect; Alanbrooke was based in London throughout the war and although his job dictated periodic absences, he was well aware as to what was going on and suffered losses amongst his own friends and family during the war. Out of touch he wasn’t! London at War 1939-45 by Philip Ziegler and published in 1995 is a masterful study of life in London not only during the Blitz, but during the war in general and as such grasps the atmosphere of London during this period very well.

However, in this writer’s opinion the best of these ‘general’ histories is The Blitz by Constantine FitzGibbon, first published in 1957 and which remains a magisterial piece of work. FitzGibbon was a well known novelist and historian who had previously written an account of the attempt on Hitler’s life, so was well qualified to write this history. It is supremely well-written and contains some of the best personal accounts of various incidents, known and lesser known. The illustrations by Henry Moore also add a touch of class to this wonderful book.

Another general history, this time of the Battle of Britain, The Narrow Margin by Derek Wood with Derek Dempster and first published in 1961, remains a valuable chronicle of the Battle of Britain. The Battle is viewed on a day-by-day basis, detailing the actions, participants and captures well the cut and thrust of the battle for the survival of this island. The organisational detail of both RAF Fighter Command and the Luftwaffe, together with the stories of the personalities and equipment used makes this a fascinating publication. An updated and illustrated version of this book was released in 1990 which takes into account many of the 'Ultra' secrets which could not be mentioned when this book was first published.

Many social histories of the ‘Home Front’ have been written. In this writer’s opinion, Angus Calder, son of the aforementioned Ritchie is the writer of two of the best books on the subject, The People’s War published in 1969 and The Myth of the Blitz published in 1990. Don’t be put off by the title of this latter book; this is in no way a revisionist work and Angus Calder is not a debunker. As he explains in his own introduction, he doesn’t use the word ‘myth’ as if exposing lies, as does one particularly forgettable book on the subject (that Calder refers to but which I will not do the honour of advertising) but rather re-examines already known facts and looks at the whole event in a rational manner, whilst at the same time reminding us that the Blitz wasn’t just about cheeky, salt-of-the-earth cockneys taking Hitler’s worst on the chin (which they actually did surprisingly often) but was also about looting, road accidents, official incompetence and the general effect on the British people, as well as how this period is portrayed in films, for example. As for The Myth itself, as Calder himself points out, it still holds true as London did survive as did the majority of Londoners without becoming gibbering wrecks.

Many companies and organisations published war histories and some of these are surprisingly interesting and well-written, mainly because the bigger organisations were able to commission first rate authors to write these histories. War on the Line published in 1946 and written by Bernard Darwin is a history of the Southern Railway during the war and although the Southern covered a vast area of Southern England from Dover to Padstow, London features prominently within its pages and includes some fascinating personal accounts from railwaymen and women of the time. London Transport at War, originally published in 1946 as London Transport Carried On and written by Charles Graves covers the story of London’s buses, trams and tubes through the wartime years and again, contains some very good personal accounts as well as being very well illustrated. It slightly glosses over the initial difficulties caused by the tubes not being originally made available as shelters but since the book is an official history written just after the war, perhaps this can be forgiven.

There have been many biographies have been written about the personalities involved during the Blitz and the Battle of Britain. Vincent Orange has written two excellent biographies of the leading RAF protagonists of the Battle of Britain; Dowding of Fighter Command is an honest and well written account of the ‘Father of Fighter Command’ whilst the simply titled Park is a biography of Sir Keith Park, the head of 11 Group, Fighter Command during the Battle of Britain and the man who was aptly christened ‘The Defender of London’ by the Germans of all people. It tells the story well of the jealousies and in-fighting within the RAF that was to lead to the dismissal of this wonderful man shortly after the Battle's conclusion but who was later to mastermind similar victories in Malta and later in the Far Eastern theatre against the Japanese.

So many books have been written about Winston Churchill, it is impossible to mention them all here. In my opinion, the best of them for sheer depth of research is Martin Gilbert’s voluminous biography Winston S Churchill of which Volume Six: Finest Hour 1939-41 published in 1989 extensively covers the Blitz period. An altogether easier to handle work on the great man is Churchill by Roy Jenkins published in 2001. This book covers the whole of Churchill’s life but there is a lengthy chapter on his Premiership during the Second World War.

There is one other book which does not really fit any of the above categories, such as they are and which goes to prove that Blitz Walking is nothing new. This book is called simply The Lost Treasures of London and was written by William Kent in 1947 when the Blitz was still very fresh in people's minds. It is a wonderful little book which consists of a series of walks through London linking those buildings, the treasures of the title, which were destroyed during the Second World War. William Kent's narrative vividly describes what was lost and when this occurred. It is beautifully illustrated and gives a startling insight into the London that might still have been had it not been for the intervention of Hitler and his Luftwaffe.

As has been mentioned earlier, this selection of books is very subjective and is certainly not exhaustive; when one has a library of over 200 books on the subject of the Second World War, of which a large proportion cover the Battle of Britain and Blitz periods, it is difficult if not impossible to mention all of them, save for presenting them in an uninspiring list but hopefully the above will give a good idea as to what to look out for. Some of the older books are now quite rare but given a bit of detective work and trawling of the internet, it is usually still possible to pick up most, if not all of the books referred to without costing a King’s Ransom.

There are many, many other fine pieces of writing, both old and new on the subject which have not been mentioned here due to the constraints of space but as mentioned earlier, I'd love to know your favourites on the subject.

Books referred to above: