Dr Carrot, Potato Pete and Making do and Mending 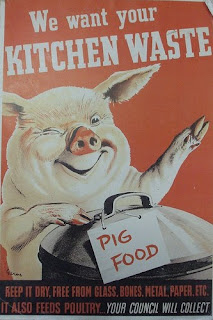 Today, in 2011 after 66 years of peacetime and with fewer and fewer survivors of the wartime years to tell us about it first-hand, it is easy for us to look back upon those times with a certain amount of bewilderment at the way things were done in wartime London and the manner in which Londoners conducted themselves and to make comparisons with today's capital city.

For example, with an almost complete lack of private motoring, the general public were far more reliant on public transport than today; bus services especially, were hard pressed and could be few and far between, even in central London. Despite all this, Londoners queued patiently for their bus and woe betide anyone who tried to barge their way to the front. Compare this behaviour with the rugby scrums that pass for bus queues today!

In 2011, recycling is back in fashion. Quite rightly, people are being urged to save their waste paper, glass, tin cans and all manner of other refuse for re-use. Despite post war complacency, when society became increasingly 'throw away' in it's outlook, we are becoming all too aware of the finite resources of our planet and the urgent need to recycle and re-use our precious raw materials. In 1941, this need to recycle and re-use was even more urgent but for somewhat different reasons. Then, as now, we were a nation dependent on international trade but in 1941 shipping shortages were becoming acute due to the German U-Boat menace; raw materials could not be relied upon to be imported in sufficient amounts for use other than in war production, so 'Make-do and Mend' became one of the catch phrases of the day. Waste of anything could not and would not be tolerated. Everything, but everything was re-used, whether it be waste paper, glass, timber, rags, metals and even waste food which was 'recycled' for use in feeding pigs. Today, the recycling message hasn't hit home with everyone yet, although things are improving. Once again, we have a long way to catch up with our counterparts of 70 years ago.

Which brings us to rationing. We will explore rationing, not just of food but of petrol, clothing and much else, in a future blog entry but rationing was brought in during wartime as a means for providing fairness in ensuring that what supplies were available could go around to all who needed them. The coupon system worked surprisingly well and although there were cheats who tried to buck the system, the vast majority of the populace saw the common sense and fairness of the system and patiently waited their turn in the queues for food. Some foodstuffs, like eggs, became incredibly rare whilst others, such as bananas and lemons became almost non-existent. What rationing did encourage however, was the need to become as self-sufficient in food as possible. Everyone with a garden or with access to an allotment grew vegetables. Every scrap of land was converted to food growing - even prestigious open spaces such as Hyde Park had large areas given over to food production and the upshot of this campaign to 'Dig for Victory' was that by the end of the war, this country had halved the figure of 55 million tons of food that had previously been imported annually prior to the outbreak of war.

As can be imagined, 70 years ago, there was nothing like the variety of foods available that we are accustomed to today. Foods were seasonal and people were encouraged to make the best of what was available. Lord Woolton was appointed the Minister of Food and in a series of brilliant campaigns, encouraged the British people to use what they had and even had a vegetable based pie named after him. Characters such as 'Potato Pete' and 'Dr Carrot' made frequent appearances in various advertising campaigns extolling the values of these and other vegetables, which could be grown cheaply and easily.

As mentioned previously, there was a 'Black Market' and certain goods could always be purchased 'under the counter' if one had sufficient money or knew someone 'in the know.' Even 70 years on, this writer finds it hard to hide his disdain for people who cheated the system and not only did this but were proud of it. When one thinks of the huge dangers that British and Allied merchant seamen faced in bringing their cargoes through U-Boat infested waters, it is doubly hard not to feel utter contempt for those who cheated the system. The novelist and former Royal Navy officer Nicholas Monsarrat perhaps described it best: 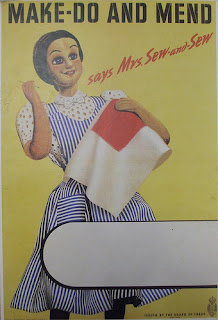 enough has been written about the hazards of bringing an oil tanker across the Atlantic, and the fate of the ones who don't make it, to establish the background and impress it on the dullest mind. None of it has been exaggerated: tankers are dynamite, and their crews are heroes of a special quality.

What then, is one to make of people who licence their private cars as taxis, in order to get extra petrol coupons; who obtain additional petrol to go to church on Sunday and then don't go: who drive hundreds of miles to a race meeting already served by special trains: who treat petrol as if could be got from a tap? What sort of men are they? Stupid? Incurably selfish? Traitorous? Do they feel clever when they've got their extra whack? Does it give them a sense of power to know that men, foolishly valorous, have fought and perished in hundreds, just to keep their cars ticking over sweetly? Once again, ten such men are not worth the skin of one of the man who dies for them."

Even 68 years after these words were written, it is hard to disagree with them, especially when one knows that the author saw the sacrifices made by the merchant seamen and their naval escorts first-hand.

Some readers of these writings over the past year or so might think that this writer harbours a secret desire to have lived in the London of 70 years ago. Perhaps surprisingly, this is not so; I am happy to live in the present day and enjoy our rebuilt, vibrant city and to enjoy a rationing free life but perhaps if we could adopt some of the values and courtesies of those Londoners of 70 years ago and combine them with the fruits of their victory that we enjoy today, then maybe London would be a more pleasant place in which to live.