A nation of organisers

It is an often quoted 'fact' that Britain was totally unprepared for war with Germany in 1939. As is often the case with many 'facts' this is not strictly accurate, although this has not stopped it being wheeled out many times over the past sixty six years since the end of the war.

To this writer at least, the inference of this total unpreparedness would have meant that those in power were completely unaware of even the slightest chance of war occurring, which surely even the most die-hard appeasers in the government must have admitted as being a distinct possibility.

The truth is that Britain had begun a tentative programme of re-armament in 1936 when the then Prime Minister Stanley Baldwin appointed Sir Thomas Inskip as Minister for Co-ordination of Defence. This programme was begun in the nick of time, because projects such as designing and building new warships and aircraft inevitably take time - for example, HMS King George V , nameship of a new class of battleship which was laid down in 1937, did not commission into the Royal Navy until December 194o, over a year into the war. Another aspect of Britain's re-armament was the re-organisation and doubling in size of the Territorial Army to some 440,000 men, on top of a regular Army strength of 224,000 plus 170,000 reservists - i.e. recently retired regulars who were now in civilian life. Of course, the speed of this re-armament was not to everyone's liking, notably Winston Churchill, who had been earmarked for the job now held by Inskip but who had not been appointed for fear of sending the wrong message to foreign powers intent on war!

It was against this background that Britain began to lurch towards the invitability of war but in one aspect at least, Britain was more prepared than in many other areas and that was in the aspect of Civil Defence, or Air Raid Precautions, as it was known until 1941. 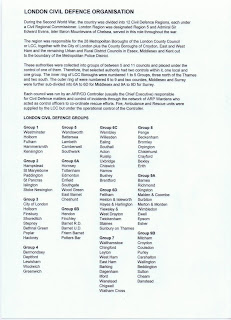 Baldwin himself who had famously said "The bomber will always get through" and perhaps it was because of this and against the background of the Spanish Civil War, that the Air Raid Precautions system or ARP was established in 1938. The whole Civil Defence network divided the country into twelve Civil Defence regions, each under the control of a Civil Regional Commissioner, reporting directly to the Ministry of Home Security. For the purposes of this exercise, we shall concentrate upon London, which was Region 5, with it's subterranean headquarters located beneath the junction of Exhibition Road and Cromwell Road adjacent to the Natural History Museum. This bunker was ready for occupation by June 1939 and was another sign of British preparedness for war.

The Commissioner for London was Admiral Sir Edward Evans - a post which he held for the duration of the war. Evans presided over a complex operation, for as Commissioner he was responsible not just for Air Raid Precautions but for a whole range of operations such as but not limited to shelters, wardens, bomb disposal, the fire services and fire guards, rescue squads, mortuaries, salvage and much more as shown on the accompanying chart, which incidentally is set for the old Metropolitan Borough of Greenwich. London itself was sub-divided into thirteen groups; Groups 1 - 4 covered the inner London boroughs, whilst Groups 6A to 9B comprising a further eight groups covered the outer London and suburban Kent, Essex, Surrey and Middlesex boroughs as also shown on an accompanying chart. The level of organisation was truly staggering and nothing was left to chance. 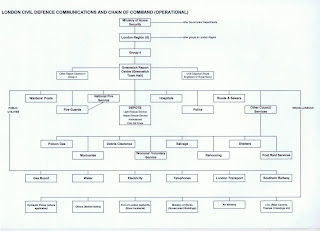 Of course, mistakes were made and for example, the initial decision not to allow the London tube stations to be used as air raid shelters for fear of fostering a trogladyte mentality amongst the civil population, can only be described as a mistake. However, mistakes were recognised and lessons were quickly learned; in the case of the tube stations a mixture of bowing to public pressure and simple common sense soon ensured that 79 stations were quickly and brilliantly adapted into effective deep-level shelters. Sometimes the mistakes were simple over estimations as to what would ensue from the onset of German bombing. For example, the government had factored casualty figures based on experiences from Zeppelin raids on London during the Great War and also from the experiences of the Spanish Civil War. So it was that the government had ordered a million coffins to deal with the expected casualties. It had been forecast by the Air Ministry that there would be 65,000 civilian casualties per week and a million casualties in the first month of any sustained bombing campaign. In the event, during the whole of the war the total number of civilian war deaths caused by enemy air attack numbered some 60,000 with approximately half of this number in London; bad enough but nowhere near as doom laden as had been predicted. To this day, the evidence of this over estimation of casualty figures can be seen in London, albeit in dwindling number; so many steel and mesh ARP stretchers had been ordered that hundreds of thousands of these were left unused at the war's end. They were to find use as replacement fences around the council estates that were built to replace the Blitz ravaged housing in many parts of London and the photograph shows an example still extant in Watergate Street, Deptford.

Of course, within all of this organisation, there were plenty of occasions when improvisation was the name of the game but for a period in our history when we were supposed to be masters of muddling through, in reality was a masterpiece of organisation.