A P Herbert, the Water Gipsy and the Royal Naval Auxiliary Patrol 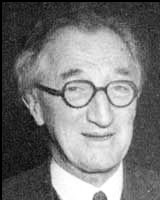 Sir Alan Herbert, better known as A P Herbert or sometimes just "APH" would today be known as a 'maverick' - born in Ashtead, Surrey in 1890, he was also a man of many parts; he was a humorist, novelist, playwright, law reform activist and for fifteen years an Independent Member of Parliament for the Oxford University constituency as well as serving in the Royal Navy during two World Wars.

He was no stranger to war, his Royal Navy service during the Great War saw him earn a Mention in Dispatches at Gallipoli and despite becoming an M P in 1935, he had no hesitation in offering his services to the Navy once again upon the outbreak of war in 1939. Perhaps uniquely for a Member of Parliament, his service in the Royal Navy was not as an officer - he served as Petty Officer A P Herbert throughout the Second World War. He also tragically lost two younger brothers, one in each war, in 1914 and 1941.

Herbert loved the River Thames, lived alongside it at Hammersmith and was a member of the Thames Conservancy Board as well as being a Freeman of the Company of Watermen and Lightermen, so it was no real surprise when Herbert became a part of the newly formed Royal Naval Auxiliary Patrol in 1939.

Despite being the largest in the World in 1939, the Royal Navy had been rarely seen in the Thames during peacetime; the Dockyards at Deptford and Woolwich had been closed during Victorian times and apart from a small victualling yard that remained in Deptford, that produced amongst other things, the infamous ships' biscuits, the Navy was surprisingly absent from the capital's tideway.

All this was to change in 1939; naval control of shipping and the convoy system meant that the Navy would need to maintain a considerable profile on the Thames and they set themselves up alongside the Port of London Authority within their prestigious offices at Tower Hill. With a nod towards their location, the Navy, never without a sense of humour named this 'Stone Frigate' HMS Yeoman. Apart from the organisation of convoys, another important aspect of the Navy's work was the Minesweeping Service and it was in the Thames Estuary that Lieutenant Commanders J D G Ouvry and R C Lewis of HMS Vernon, the Navy's school of mines and torpedoes, each earned a deserved George Cross for defusing the first magnetic mine, and thus discovering it's secrets when these weapons had come close to paralysing shipping movements into and out of the Port of London. Because of their work an effective countermeasure, in the form of degaussing - in other words, reducing the magnetic signatures of ships - was quickly introduced.

However, perhaps the most famous section of the Royal Navy on London River, was certainly the one with the highest profile and one which saw the White Ensign flying proudly along the length of the River Thames, was the Royal Naval Auxiliary Patrol, a kind of naval version of the Home Guard which saw gentlemen of a certain age mixing with younger recruits aboard requisitioned patrol boats performing a variety of tasks. At first glance, it perhaps may have looked like a waterbourne 'Dad's Army' pottering about on the river but in reality they performed many vital duties and were often in harm's way. Amongst other things, the small patrol boats towed barges out of danger during the Blitz and provided invaluable assistance to the Fire Brigade and ARP services with their fire watching duties. They also provided some sixty mine watching barges along the river which provided important information in spotting the location of mines which had been dropped into the Thames, sometimes as far upstream as Hammersmith. There were also many downed airmen, both British and German who had reason to be grateful to the RNAP who were rescued by them having parachuted into the river from their shot-down aircraft. One of the more mundane duties, although no less important, was the delivery and collection service from merchant vessels entering or leaving the Port of London.

It was natural that A P Herbert should join the RNAP, as it was the type of organisation that might have been created for him. His own motor launch, the Water Gipsy, named after one of his earlier novels became HMS Water Gipsy and was arguably the heaviest armed vessel of her size in the Navy, having been armed with several additional machine guns 'acquired' by Herbert through his various contacts. She once opened fire on German bombers directly over the Palace of Westminster and Herbert later claimed that this was the only occasion that one of HM Ships had opened fire in direct defence of the 'Mother of Parliaments.'

Despite suffering numerous casualties in both men and vessels, including an occasion when their base at Tower Pier received a direct hit from a high explosive bomb in 1940, at the end of the War, these brave men were denied the 1939-45 Star because it was deemed by the Admiralty that they had only operated in "sheltered waters." Sir Alan Herbert, as he had become in 1945 in Churchill's resignation Honours List, took up the battle in Parliament.

Despite this impeccable argument, this was a battle that Sir Alan was destined not to win, as the Admiralty remain unmoved and the medals remained unawarded.

Despite this, perhaps Herbert did manage to have the last laugh against Their Lordships, when with the war safely over, all members of the service were obliged to complete a questionnaire regarding their pre-war employment. In answer to the first question which was "How were you employed before the war?" he answered succinctly "Gainfully." And to a question about the character of his work, he replied "Good!"

If ever a man had the Thames in his blood, it was A P Herbert. After the war, he remained as Independent Member of Parliament for Oxford University until the seat was abolished in 1950 and continued writing, both novels and humorous works for publications such as Punch as well as his autobiography entitled simply "APH: His Life and Times" which appeared in 1970, one year before his death, which occurred on 11th November 1971.