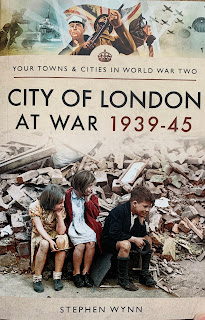 The latest in Pen & Sword Military's excellent series of "Your Towns & Cities in World War Two" covers the City of London, the "Square Mile" that was and remains the financial and business heart of the United Kingdom and comes from the author Stephen Wynn, who has contributed many books to this series.

Several books have been written on the subject of the City of London during the Blitz, concentrating on specific raids, more usually the great fire raid of 29 December 1940, which became known as "The Second Great Fire of London" but in this new offering, Mr Wynn has sensibly decided to look at all aspects of the Square Mile during the conflict and does so in a chronological, year-by-year basis and covers such events as the establishment and organisation of the Civil Defence Services in the City and the Home Guard, as well as Parliamentary and local authority representation. The book also looks at how various establishments and institutions fared during the war, such as the Tower of London and St Bartholomew's Hospital.

As we travel through the years to 1940 and 1941, the focus inevitably shifts to the Blitz and it is with this aspect of the book that I have some issues. For example, in several of the larger raids, the author details the casualties but rather than just providing us with a list of those who lost their lives and perhaps their ages, Mr Wynn feels the need to attempt to provide details of each person; this is fine where the individual has an interesting past or has an intriguing story behind them but merely repeating "the author has been unable to confirm exactly where he/she was buried" becomes tedious in the extreme after in excess of fifty repetitions. Surely it would have been better just to list the names in an appendix and just mention some of those individuals in the main text whenever they had an interesting story to tell.

Another gripe - and one that suggests more than a little laziness in the author's research process - concerns the terrible incident at Bank Station, when he mentions a casualty who was serving with the Women''s Voluntary Service which warrants the comment from the author "This also suggests that the Bank Underground Station was being used as an air raid shelter at this time." This statement beggars belief as even a cursory check with the London Transport Museum or of the official London Transport wartime history would have revealed this to be a fact and indeed, it was the fact that the station was being used as a shelter which accounted for the high casualty figures.

A fault in the research process is also suggested when the author mentions another casualty, this time at Cannon Street, when he mentions "William worked as a fireman and in the circumstances, it was more likely that he was at Cannon Street working rather than just passing through at the time." Once again, this shows a lack of proper research, as an inspection of the London Fire Brigade Roll of Honour, which is readily and easily accessible, reveals that the person in question was indeed on duty. Incidentally, the author speculates over this particular fireman - William Frederick Knight - but then completely overlooks his colleague Stanley Thomas Conniff - who died with him at the same location on that same night. At least one other London fireman who died in the Square Mile on the same night, albeit at a different location completely fails to warrant a mention, so one has to wonder at the completeness of the casualty lists that the author provides.

My final complaint concerns one of the photographs, which is captioned incorrectly; a photo that purports to be The Guildhall is clearly the Mansion House and should be corrected.

Notwithstanding these shortcomings, the author relates many interesting anecdotes and facts during the narrative, which leads us through the slightly quieter years of 1942 and 1943, before we reach the momentous events of 1944 and 1945 which set the country firmly on the road to victory, against a home backdrop of the Vengeance Weapons campaign of those years, both of which affected the Square Mile, although curiously, the author fails to mention the V-2 attack on the City of London Corporation owned Smithfield Market of 8 March 1945, which caused heavy loss of life.

This book is an interesting resource which should appeal to the general reader but which in this reviewer's opinion, requires a carefully revised and updated second edition.

Posted by Steve Hunnisett at 15:58