Book Review: The Thames at War, Saving London from The Blitz by Gustav Milne 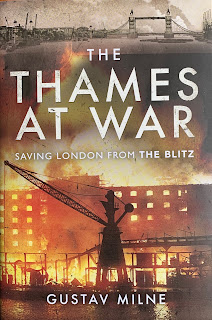 The Blitz remains a defining moment in the more recent history of our capital city, a time when Londoners found themselves under almost nightly attack from September 1940 to May 1941 and following a welcome intermission in the second half of 1941 and 1942, were once again under fire during the Little Blitz of late 1943 to early 1944 and rounded off by Hitler's so-called "Vengeance Weapons" from June 1944 right up until late March 1945, barely six weeks before the Nazi capitulation signalled the end of the war in Europe.

This new book by Gustav Milne and the Thames Discovery Programme, a community based archaeological project that surveys the Thames and it's foreshore, tells the story of the London County Council's Thames-Flood Prevention Emergency Repairs Service, or "T-F" for short, one of the lesser known facets of London's Civil Defence organisation during those wartime years, which was largely the creation of Sir Thomas Pierson Frank, the LCC's Chief Engineer from 1930 to 1946 - a classic case of "Cometh the hour, cometh the man" if ever there was one.

The River Thames is London's raison d'etre and then as now, feeds a major port, which during the Second World War was the largest and busiest in the world. But whilst acting as London's life blood, an enemy bomb, doodlebug or rocket could breach the river's embankments at high tide, or fracture one of the many tunnels running beneath it and instantly turn the Thames into a terrifying monster which could kill thousands, paralyse the capital's services and cripple a major part of the British war effort.

As we learn from this book, the embankments were breached on numerous occasions, as were at least two of the tunnels running beneath the Thames but thanks to the superb work of the T-F teams, coupled with a certain amount of good fortune, a major flood disaster in the capital never followed.

The book begins by telling us something of the history of the various floods to affect London in the years prior to the Second World War and of the establishment of the T-F Service. A detailed summary of the works undertaken by the various Rapid Response Teams of the T-F Service then follows, which explains how their work was undertaken of necessity always with one eye on the clock and the state of the ever changing tides. We then learn something of the other emergency services on the river, such as the Auxiliary Fire Service and the Thames Division of the Metropolitan Police, as well as the efforts to keep London's river crossings open throughout the Blitz and the running repairs that were frequently required following heavy raids. We also learn of the work of the various engineers and labourers who worked for the T-F Service, many of whom remain anonymous to this day. Of course, the Port of London would be meaningless without the shipping that served it and the book finishes up with a section devoted to the ships lost on the river and in it's estuary, as well as examining the role played by the Thames during two pivotal operations of the war, DYNAMO and OVERLORD, both of which were crucial to the ultimate Allied victory.

I have one very minor complaint - the author insists on calling the V-1 Buzz Bombs "Rockets" - this is not correct, they were "Flying Bombs" which were not rocket powered (they were propelled by a pulse-jet engine) and I suspect that he has perhaps got them slightly confused with the subsequent V-2 weapons, which were indeed rockets designed by one Wernher von Braun and his team.

However, this is a minor gripe which did not detract from my overall enjoyment of this well-written, profusely illustrated and meticulously researched book and I have no hesitation in commending it to you, whether you are a guide like me, or have a more general interest in London's wartime history.

THE THAMES AT WAR: Saving London from the Blitz
By Gustav Milne

Posted by Steve Hunnisett at 15:46