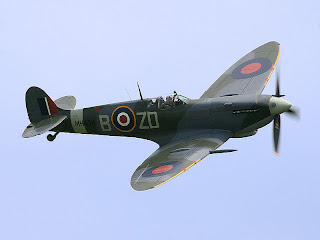 On 6th March 1936 a small patchwork painted fighter aeroplane took off from Eastleigh Aerodrome in Hampshire for its first short test flight. At the controls that day was test pilot Joseph ‘Mutt’ Summers. When he landed the pretty little fighter after just fifteen minutes flying, he taxied it over towards the hangar, climbed out of the cockpit and said to those assembled “I don’t want anything touched.” This comment has subsequently become misinterpreted over the years, because as good as this fighter later proved to be, what Summers really meant was that the first flight had been a success and that there were no faults apparent which needed correcting before his next flight.
This little fighter numbered K5054 was the prototype Supermarine Spitfire and following this first tentative test flight, many months of further testing were to follow before the design was put into production in 1938, ultimately becoming the RAF’s standard fighter aircraft during the Second World War.

Much of this gruelling programme of test flying was done by Jeffrey Quill, another of Supermarine’s test pilots. Quill recalled in his book ‘Spitfire – A Test Pilot’s Story’

The Spitfire was designed by RJ Mitchell, Chief Designer at Supermarine, in response to the Air Ministry specification F36/34, later modified to F10/35 which was written around the prototype. The original Air Ministry specification also covered the Hawker Hurricane, designed by Sydney Camm but whilst the Hurricane was of a traditional wooden framed, fabric covered design, the Spitfire was something altogether different, being of a then radical all metal design. This led to problems - the Hurricane was much simpler to produce and easier to repair and indeed, during the Battle of Britain, there were far more Hurricanes in Fighter Command’s service than there were Spitfires but the design of the Spitfire meant that it could be developed almost infinitely, with larger engines, bigger armaments and many other refinements added over the years of production. Indeed, the Spitfire was the only Allied fighter of the War to be in production from the first day of the war to the last, with the last of the 20,351 aircraft to be built not rolling off the production line until February 1948. This last Spitfire, the Mark 24 was a very different creature to the prototype, being capable of a top speed of 452 mph as opposed to the 348 of the prototype and being armed with four 20mm Hispano cannons instead of eight Browning .303” machine guns and powered by a Rolls Royce Griffon engine rather than the original Merlin. The Mark 24 was also twice the weight of the prototype, which truly demonstrates the genius and potential of the original design.

However, we are jumping ahead in time too quickly and should return to the events of 1936. Mitchell’s design was a logical development of his work on the various Supermarine floatplane entrants for the Schneider Trophy during the late 1920s and early 30s, culminating in the brilliant S6B of 1931 which also broke the World air speed record in reaching 407.5 mph. These aircraft were powered by various marks of Rolls Royce ‘R’ engines, which would ultimately be developed into the famous Merlin engine.

When Mitchell started work on the fighter that was to become the Spitfire, it was originally titled somewhat unimaginatively, ‘The Supermarine Fighter’ and was at one stage destined to become the ‘Shrew’ before the name ‘Spitfire’ was given to the new fighter. The name was reputedly given by Sir Robert McLean, the Chairman of Vickers Supermarine and when told about it, Mitchell, never an emotional man simply replied that it was “Just the sort of bloody silly name they would give it!”

By this stage, Mitchell was a very sick man who was dying from cancer. When this happened in June 1937, his erstwhile Chief Draughtsman, Joe Smith was promoted and under his guidance, the Spitfire was seen into production, development and evolution that would last throughout the War and beyond.

The Spitfire had an immediate impact and effect upon all who flew it. Pilots found it a wonderful aircraft to fly with no obvious vices and it is interesting to compare the views of three of the RAF’s Battle of Britain ‘aces’ with regard to their experiences with the fighter. Firstly, ‘Sailor’ Malan:

“The Spitfire had style and was obviously a killer….Moreover, she was a perfect lady. She had no vices. She was beautifully responsive. You could dive until your eyes were popping out of your head, she would still answer to a touch.”

Bob Doe was a little more unemotional, but his love for the aircraft was still evident when he spoke to Stephen Bungay:

“It became a part of you, it was an absolute joy.”

So we can see then, that the Spitfire very quickly won over all those who came into contact with her – certainly on the British side and there were also some Germans who wanted her as well. Adolf Galland famously fell foul of Hermann Goring when he replied to the Reichsmarschall’s question as to what he could provide to help Galland and his pilots win the Battle of Britain. He simply answered “I should like an outfit of Spitfires for my squadron.”

Although this statement was somewhat misunderstood when it became public – Galland was simply requesting that a more agile German fighter be available – his comments showed the deep respect with which the Luftwaffe held the Spitfire – and the men that flew them.

In 1941 with the Battle of Britain safely won, RAF Fighter Command, under a new commander, William Sholto Douglas, could afford the luxury of a more aggressive policy than had been possible during the Battle, using their new Spitfire Mark Vs on fighter sweeps over occupied France known as ‘Rhubarbs.’ In hindsight, the wisdom of these sweeps has been questioned as many aircraft were lost, as were their pilots, many of whom had previously survived the Battle of Britain. This was a curious reversal of fortune for the RAF, who now found themselves in the same situation as the Luftwaffe in 1940 – being shot down over enemy territory and with every chance that the surviving pilots would fall into captivity. It was also during these fighter sweeps that a new adversary emerged for the Spitfire, in the form of the FW190 which outclassed the Spitfire V in almost every way. It was now that the Spitfire’s almost infinite capability for development became apparent with the appearance of the Mark IX with the new two-stage supercharged Merlin 61 engine which transformed the fighter's performance and made it capable of taking on the best of Luftwaffe’s fighters once again. The Mark IX had the advantage of being almost indistinguishable from the earlier Mark V to the Germans, thus making every Spitfire they saw a potential Mark IX and deserving of appropriate respect.

So it continued for the Spitfire – as well as the classic interceptor fighter role, they were used as ground attack aircraft, ‘tropicalised’ for use in the desert and the Far East, high altitude interceptors, carrier borne as the Seafire and for photo reconnaissance purposes (PR) at high altitude. It was PR Spitfires that discovered the "Bismarck", provided the first photographs of the German ’Freya’ and ‘Wurzburg’ radars at Bruneval, uncovered the V-1 launch sites in France and Holland and found the vital evidence of the German V-2s at Peenemunde. It seemed that there was almost nothing that the Spitfire couldn’t do and that they would continue forever.

However, it was not to be – the advent of the jet engine saw to that and with the war nine years over, it was on 1st April 1954 that the last operational Spitfire flight was undertaken by a PR Mark 19 (the RAF had changed from Roman to Arabic numerals in 1948) from RAF Seletar in Singapore and the last non-operational flight was flown by another PR Mark 19 of the Temperature and Humidity Flight based at RAF Woodvale, near Southport on 9th June 1957.

Thanks to the work of the RAF’s Battle of Britain Memorial Flight and many private preservationists, we can still see and hear the Spitfire flying today at air shows and flypasts and are able to witness for ourselves the perfect lady in her true element.