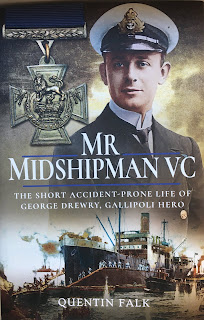 For this month's blog post, we stay with the First World War for a review of a book with which I must confess at the outset, I had a very small hand in the research on behalf of the author, Quentin Falk. This input was minimal however, and the work under review here is very much the fruit of the author's own labours.

The author of this splendid biography of George Drewry VC is perhaps better known as a show business journalist and film critic who has written acclaimed biographies of Sir Alfred Hitchcock, Anthony Hopkins and Albert Finney amongst others and so is venturing into somewhat uncharted waters with his latest work.

As Falk himself explains, it was a family connection that first took him to Gallipoli, with a mission to find a memorial to his wife's great uncle, Major John Jocelyn Doyne Sillery, known as 'Jack', who had served with the 11th Battalion, The Manchester Regiment and was most probably killed the day after going ashore on 6 August 1915. As part of this pilgrimage, Quentin and his wife had booked a battlefield tour, guided by a mutual friend, Clive Harris and it was his tour that he first heard the story of how no fewer than twelve Victoria Crosses had been won on the first day of the invasion, including the famous 'Six before breakfast' exploits of the Lancashire Fusiliers on 'W' Beach at Cape Helles. It was on the adjacent 'V' Beach that Quentin first heard the name of George Leslie Drewry, a 20 year old Royal Naval Reservist and former Merchant Navy officer with my old company, the Peninsular & Oriental Steam Navigation Company, known universally simply as the P&O. Further research on the campaign followed and having now decided to write George Drewry's story, a further visit ensued in 2017, as well as to another of the young officer's haunts, Scapa Flow, where he would meet his premature end.

George Leslie Drewry was born in 1894 and his career as a mariner was perhaps almost predestined, for his father Thomas was a Marine Engineer, originally from Lincolnshire but who by the time of George's birth, had relocated to Forest Gate. This was due to Thomas's job as a Engineer Superintendent for P&O, based at the nearby Royal Albert Dock. George was the second youngest of four brothers and eventually, all four of Thomas Drewry's sons were to follow in his footsteps by joining the P&O in various capacities.

George was educated at Merchant Taylors' School but by May 1909, at the age of just fourteen and a half, he was one of six apprentices taken on board the Indian Empire and joined his new ship, a three masted barque, at Liverpool's Queen's Dock. It was whilst serving on board the Indian Empire, that George's 'accident prone' tag perhaps first became apparent when he fell some 20 feet from the rigging in to the Hunter River in Newcastle, New South Wales whilst in the course of clearing an obstruction from the vessel's top-hamper. He was fished out of the river by the Second Mate and suffered an injured ankle as well as from bruises and shock but was otherwise none the worse for his ordeal.

The author goes on to describe George's early exploits on the Indian Empire, culminating in a shipwreck in 1912 close to Cape Horn, following which he and his shipmates were marooned on an island for sixteen days before rescue was forthcoming. Following George's return to home shores and still just shy of his eighteenth birthday, he became an employee of the P&O and was registered as Fifth Officer on the passenger/cargo liner Palma. By the following year, he had risen in rank to Fourth Officer and was serving on a sister vessel, the Isis. It was around this same time, Falk informs us, that Drewry enlisted as a Midshipman in the Royal Naval Reserve, which was at the time the branch of the Royal Navy for professional (i.e. Merchant Navy or retired RN) seafarers, as opposed to the Royal Naval Volunteer Reserve, which was for the so-called "weekend sailors" who had civilian occupations other than the sea.

On the outbreak of war on 3 August 1914, George was in Port Said and was called up for Naval service, along with 30,000 of his fellow officers and men. He was now a Midshipman RNR and after a short spell at HMS Egmont, a "Stone Frigate" or shore base at Malta, he was sent to his first seagoing draft, HMS Hussar, a veteran minesweeper serving in the Eastern Mediterranean.

It would not be fair on the author for me to describe in this review George's Victoria Cross winning exploits at 'V' Beach whilst serving aboard the River Clyde and so you will need to purchase a copy of the book to read about this amazing action. Suffice to say, like all those awarded the VC, George showed total disregard for his own safety, in his case trying to assist troops who were being cut down under murderous fire and despite having received a head wound early in the action.

George's Victoria Cross citation was announced in August 1915, although the wheels had been set in motion for his and the other awards almost immediately following the action. His medal was awarded on 22 November 1915 by King George V at an investiture at Buckingham Palace. His VC award was followed by the presentation of a Sword of Honour from the Imperial Merchant Service Guild in recognition of George being the first officer of the Royal Naval Reserve and the Merchant Service to win the Victoria Cross.

Following the award of the VC, Quentin goes on to describe George's subsequent career in the Royal Navy as well as something of the exploits of his brothers during their own wartime service. George, by this time promoted to Acting Sub Lieutenant, was drafted to the battleship HMS Conqueror on 28 December 1916 and whilst undoubtedly a prestigious appointment for the young officer, it would have seemed a strange life after the excitement and action aboard the Hussar and River Clyde, as the great battleship spent most of her time in the anchorage at Scapa Flow, rarely proceeding to sea in the post-Jutland days.

The promise of further action appeared on the horizon when in  early 1918, now promoted to Lieutenant, George attended an anti-submarine course at Portland, during which he received instruction in the use of hydrophones, which in those days were an integral part of the new art of submarine detection. Following completion of the course, he was appointed in command of HMT William Jackson, a naval trawler designed for minesweeping, patrol and anti-submarine work. George took command of the vessel upon her completion at the shipyard of Cochrane & Sons in Selby and saw her through her trials and working-up exercises.

Sadly, George was never to take command of his new charge in action, for on 2 August 1918, barely two days after he had brought the vessel from the successful completion of sea trials and working-up to the fleet base of Scapa Flow, he was dead, having suffered a fractured skull and broken arm when a derrick (a ship's crane) fell on him following the failure of a retaining shackle and block.

Thus ended the short, action packed but accident-prone life of Lieutenant George Drewry VC. Quentin Falk has brought him back to life in this illuminating biography that not only tells of his life but also captures something of the period in which George lived. I commend this book to you most heartily.

Mr Midshipman VC: The short, accident-prone life of George Drewry, Gallipoli Hero by Quentin Falk, is published by Pen & Sword Books Limited and is available direct from the publisher's website at the price of £15.99 or from all good booksellers or other online sources.

Posted by Steve Hunnisett at 16:08 No comments: