History on our doorsteps

One is never too far from history in London and reminders of the capital's wartime past are certainly still out there in abundance if one knows where to look. Over the years, I've shared photographs of wartime remnants that I encounter on my travels and in the weeks before Christmas, I set out to take some photographs of other reminders of our wartime history.

My first foray took me just across the Thames from my own home to photograph something that I had seen previously but had never thought to photograph before. A short journey on the Docklands Light Railway found me at Stratford and walking along the Greenway - a footpath and cycleway that runs along the top of the Northern Outfall sewer pipe and which also passes the Olympic Stadium. 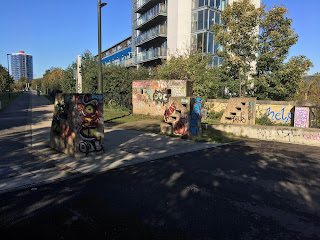 Following the fall of France in June 1940, a Nazi invasion of this country was thought to be a serious proposition and urgent arrangements were put in hand to counter the threat. Under the direction of General Sir Edmund Ironside, Commander in Chief Home Forces, a series of fixed defences known as the "GHQ Line" and a further series of "Stop Lines" were put in place around London and across the southeast of England. Perhaps it was felt that German tanks could proceed easily along the Greenway as in addition to pillboxes at the Thames end of the Outfall pipe, anti-tank obstructions and a further pillbox was installed at Stratford as part of the London Stop Line Outer, or "Line A" as it was also known. General Ironside's plans for fixed defences were controversial and those commanders who had seen recent action during the British Expeditionary Force's withdrawal from France were vehement in their condemnation of this proliferation of concrete, which in France, the German Army had simply manoeuvered around, or obliterated from the air. Indeed, the then Major General Bernard Montgomery simply stated that he was in "complete disagreement with the general approach to the defence of Britain" and refused to apply it!

He was supported by General Alan Brooke, who had conducted a brilliant fighting withdrawal of his II Corps to Dunkirk, who also appreciated the realities of modern, mobile warfare and who proposed to create mobile reserves close to probable German landing sites. These views in particular, coincided with those of Winston Churchill and following a conversation between the Prime Minister and Brooke during a visit to the latter's Southern Command, Ironside was sacked after only two months in the role. His replacement was Brooke and as a consequence, the "pill box madness" subsided in favour of more mobile forces. History tells us that the invasion never came and fortunately, the Olympic Park defences were never called upon to fire a shot in anger.

For my next stop, I wanted to check out a ghost sign in nearby Bethnal Green that I had been tipped off about and a short bus journey later, I found myself walking along Hereford Street searching for evidence of another facet of wartime London.

Hereford Street is quite close to Brick Lane in the heart of the old East End of London and the faded sign on the wall of St Matthew's Church Gardens reads "FAP GAS CASES - WOMEN" - FAP stands for First Aid Post and this particular example would have been for treatment of women victims of a poison gas attack on the area. Since the Great War of 1914-18 when poison gas had been used by both sides on the Western Front, there was a great fear that any future conflict would see the civilian populations of British cities and towns subjected to the same horrors. As a consequence, gas masks had been issued to every citizen beginning in 1938 at the time of the Munich Crisis and gas decontamination had been one of the mainstays of the Civil Defence, or Air Raid Precautions arrangements established in the run-up to war in 1939. Mercifully, when war did come, neither side resorted to the use of poison gas and like the anti-invasion measures in nearby Stratford, the Bethnal Green Gas Decontamination Centre was never needed, although the First Aid Post would undoubtedly have seen a heavy workload during the Blitz.

Another short bus journey saw me at Hackney Town Hall, where at the rear of the building is the entrance to an underground bunker. This structure was one of the entrances to the Civil Defence Control Centre for the Metropolitan Borough of Hackney and as such, would have seen extensive service during the Blitz of 1940-41 and the subsequent V-Weapons campaigns of 1944-45.

Another short bus journey took me to outside no. 322 Kingsland Road, Dalston where the unmistakeable shape of an air raid shelter entrance can still be seen. It is unclear as to why this house did not have the more familiar shape of an Anderson Shelter in the back garden but it is possible that the premises saw industrial use during the war, or perhaps the owner of the time could afford to pay for a privately built and what he would have hoped was a sturdier structure built deeper into the ground than the garden structure. Interestingly, the shelter now has a door with a letter box, although there was a note to the postman instructing him not to deliver any letters here!

On my way home - and much closer to Blitzwalker Towers - I then discovered something entirely by chance and which despite being less than ten minutes walk from my own front door, I had never spotted previously. Walking home from the bus stop via a slightly different route to normal, I was astonished to discover a set of "stretcher fences" in Marlborough Lane, Charlton. Before the outbreak of war, the British Government had assumed that civilian casualties in any future war would be on a Biblical scale with hundreds of thousands killed and injured within a few weeks of the onset of any bombing campaign. As such, suitable numbers of the tubular steel and wire mesh "ARP" Stretchers were manufactured and stockpiled to await the inevitable apocalypse. Fortunately, although the Blitz did claim some 30,000 killed and many more injured in London alone, the mass casualties never materialised and consequently, most of these stretchers remained unused, in storage. Post-war, a quick way needed to be found to replace the wrought iron railings sacrificed for the war effort and also to provide boundary fencing for the many new council estates that appeared to replace bomb damaged and destroyed housing. A quick and what proved to be lasting solution was found in the unused stretchers and today, over seventy years since the end of the war, many of these fences can still be seen at many locations across London.

A few weeks later saw me make another foray, this time with my good friend and designer of our main website, Sam Dorrington, who had tipped me off about some shelters and similar structures in his own locality of Carshalton and Wallington. One of these structures I was aware of but had never photographed, whilst the others were not known to me. After an intial exploration of Kenley Aerodrome (which will feature in a future blog post), Sam drove me to what he described as a "mystery location" which was actually on the Roundshaw Estate, which during the wartime years was part of the former Croydon Airport, at that time in use as a Fighter Station for the RAF. After a short walk through some woodland, we came across the unmistakeable shape of an air raid shelter, now daubed with graffiti but sustantially intact. Sam soon set to work in uncovering the outline of where the blast walls had been located.


Jumping back into the car, Sam soon took us to the site of another public shelter, this time in nearby Carshalton. Located on the Wrythe Recreation Ground, adjacent to Carshalton Athletic Football Club, I was aware of this shelter but had never examined it previously. This was a substantial concrete structure set into the grass. Most, if not all of the surrounding housing would have had sufficient space for an Anderson Shelter in the garden but during the war, there was a large gas works quite close to this location as well as other industry, so it is quite possible that this shelter was constructed with the workers at these facilities in mind. 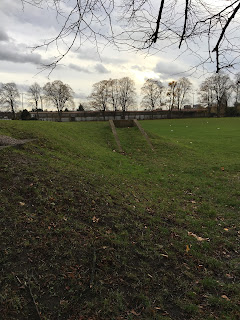 Our next port of call was close to Sam's home and took the form of an Air Raid Wardens' Post, located at Mellows Park in Wallington. Made famous by Bill Pertwee's portrayal of Chief Warden Hodges in the classic comedy Dad's Army, the real-life Wardens were an extremely brave and dedicated group of men and women, who not only enforced the black-out but performed many other vital duties during the Blitz, such as supervising air raid shelters, rescue work and acting as 'First Responders' at bomb incidents. They were controlled at a municipal level, with a senior warden on duty at the local borough control, as we saw above at Hackney but operating through a network of Wardens' Posts. Sometimes, these posts were improvised affairs in the basements of existing buildings but more often than not, they were located in small, purpose-built concrete structures that looked like miniature air raid shelters. This was the case at Mellows Park and despite the sadly inevitable grafitti, the structure remains substantially intact and is locally listed.

Our final visit for the day was just a short drive away and in the fading light, we arrived at nearby Woodcote Green in Wallington, where another similar looking but slightly wider structure to the Mellows Park Wardens' Post was located. A large mound in the grass adjacent to the brick structure suggested that a shelter was also present and that this small building was a shelter entrance, perhaps also doubling up as a Wardens' Post. A visit to the London Borough of Sutton archives will be required at some point to ascertain what exactly the arrangements were here.

All in all, combined with the visit to Kenley, it was a fascinating day of exploration only about an hour from my own home and thanks were due to Sam for giving up his time to show me his local wartime history.

Despite London being a vast city, there is still plenty of history, if not quite on one's doorstep, then certainly within a short distance of it. I shall be out and about again quite soon in my search for some more examples of our wartime past.

Posted by Steve Hunnisett at 17:39 No comments: