My Thoughts on "Darkest Hour" 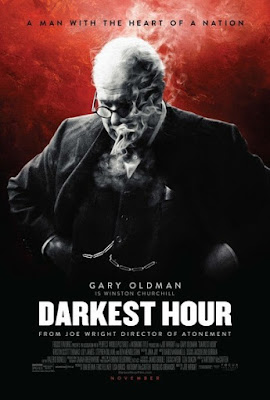 As there have been two decent Second World War related films released in the past twelve months, I thought that following on from my review of Dunkirk in July of last year then I should perhaps share my thoughts on Darkest Hour the new film which loosely covers the first twenty three days of Winston Churchill's Premiership from his taking the job upon Neville Chamberlain's resignation on 9 May 1940 until towards the end of the Dunkirk evacuation when it became apparent that the bulk of the British Expeditionary Force was going to be saved.

Before going any further, it should be remembered that as with Dunkirk, this film is not a documentary, it is a film and therefore plays fast and loose with historical fact on occasions as well as employing one or two fairly creaky links to the plot.

Gary Oldman's performance as Churchill is quite magnificent and he simply dominates the film. The supporting performances are strong too, with Kristin Scott-Thomas as Clementine Churchill, Ronald Pickup as Chamberlain and Samuel West as Anthony Eden, particularly worthy of note.

The film opens with what proved to Chamberlain's final appearance as Prime Minister in the House of Commons and this leads to my first minor gripe as to the accuracy of the film. During the debate, the Leader of the Opposition, Clement Attlee (played by David Schofield) refers to Chamberlain by name; this of course is never allowed in the House as members are referred to as "Members" or "Right Honourable Members" but never by name. Also the Chamber of the House of Commons appears in a very strange sort of gloomy half-light, no doubt for dramatic purposes but in no way a true representation. Attlee also comes across as a somewhat weak and vacillating character, when in reality, he was a staunch anti-Nazi and supporter of Churchill as Prime Minister.

Lord Halifax (played by Stephen Dillane) and Chamberlain to a lesser extent are played very much as the villains of the piece, constantly trying to undermine the new Prime Minister and working behind his back to negotiate a separate peace. The reality of it was that whilst Halifax did indeed favour a negotiated settlement, he didn't go behind Churchill's back and Chamberlain, whilst he didn't wholly approve of Churchill, didn't actively try to undermine him for his own political ends as is shown in the film.

It is true that Winston Churchill did have an initially tricky relationship with King George VI (sympathetically played here by Ben Mendelsohn) but the King did warm to his new Prime Minister and they eventually became very close friends. Whether the circumstances of the King's epiphany were as depicted in the film, one has to doubt.

The film does show Churchill's decisive nature well - firing off instructions and "Action this Day" memos to all and sundry, although the notion that Operation Dynamo, as the Dunkirk Evacuation was code named, was Churchill's own idea is quite false. Like the Dunkirk film reviewed in July, this movie also perpetuates the myth that the BEF was saved entirely by the "Little Ships" when in reality, only some 5-7 percent of the men were evacuated this way, with the vast majority being rescued by the Royal Navy's warships and the larger transport ships requisitioned from the Merchant Navy.

Darkest Hour does touch on what Churchill called his 'Black Dog' - his momentary periods of depression and self-doubt but this in turn leads to what this writer feels is the biggest hole in the script. At no point did the Prime Minister ever disappear down in to the London Underground to canvass the opinion of the British public as to whether to continue the war, or to sit down and negotiate with Hitler. Also, what in reality should be a less than five minute journey from St James Park to Westminster seems to last an eternity whilst Churchill seeks the opinion of almost everyone in the carriage!

The film does correctly show Churchill's meeting with members of his 'Outer Cabinet' in which he gauged their opinion, effectively outmanoeuvring any lingering opposition to his policy of fighting on and which culminates in his now famous "We shall never surrender" speech in the House on 4 June 1940.

There is a lot more to this film that the incidents described above and despite my quibbles, it remains a superb piece of film making, which I thoroughly recommend to you. If Gary Oldman should win a Best Actor Oscar for his performance as Churchill, it will be one of the most well-deserved and popular wins ever.
Posted by Steve Hunnisett at 17:14 No comments: