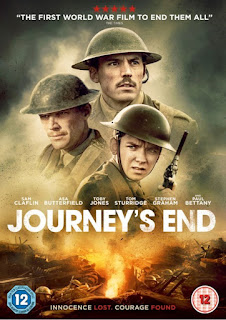 As regular readers of this blog will know, I am an avid film fan and have covered the subject of war films in the past, although my interest in movies is not limited solely to that particular genre. Last year, I became involved as one of the volunteer organisers of my local Charlton & Woolwich Free Film Festival and helped to stage an open air showing of the 1969 classic Battle of Britain, which we screened in the open air surroundings of the magnificent St George's Garrison Church in Woolwich.

This year, we wanted to mark the centenary of the ending of the First World War in 1918 with a suitable film and it didn't take much persuasion on my part to convince my colleagues that the latest screen version of Journey's End was a "must have" for the 2018 Festival.

Journey's End was originally written as a stage play in 1928 by RC Sherriff, who himself served during the Great War in the 9th East Surreys and was wounded during the Third Battle of Ypres in 1917. It was also adapted as a novel by Sherriff and has remained a popular and powerful work ever since it appeared. It has been produced on stage both professionally in the West End and on Broadway, as well as with numerous amateur productions. It has also been adapted for film and television over the years prior to this most recent release.

As with the previous screening that I had event-managed, I wanted to make the experience for the audience more than just a case of turning up, watching the film and then going home again and wanted to provide some insights behind the original work as well as to the real-life events that inspired Sherriff to write the piece.

Using the power of social media, I contacted Taff Gillingham, who had acted as Military Historical Advisor for the film and who is a stickler for correct detail in any production with which he is involved. Although we have never met, Taff and I have followed each other on Twitter for many years and are very much on the "same wavelength" when it comes to matters of military history. Taff immediately and very kindly offered to help and although he was unable to come down to London to appear personally at the screening, he very kindly recorded a video introduction to the film in which he provided many fascinating insights, not only into his own involvement with the project but also concerning the events which lay at the centre of the story. Relevant to the introduction was the fact that Taff spoke standing in front of the very uniform worn by Asa Butterfield in the movie.

Taff began by explaining the difficulty of staging or filming the story for a modern audience who would not necessarily be aware of the German Spring Offensive. The play revolves around the events immediately leading up to the opening of the Kaiserschlacht as it was known, in the early hours of 21 March 1918. At the time, intelligence had ascertained that the offensive was definitely coming and was also able to predict with some confidence when this would occur and so the key to the play is the suspense - the men in the Redoubt all know that the attack is coming and it is their reactions to this grim fact that forms the central part of the plot. Even in 1928, the opening date of the Spring Offensive was etched in the memories of everyone that had been involved and even of those people back home in Britain who remembered the news coming in. As Taff explained, it was the equivalent of setting a modern play in an office block in New York on 10 September 2001 - there would be no need to explain what was going to happen because everyone watching the play knows what is about to happen - the suspense being in how the characters are going to react and what is going to happen to them.

Taff also told us something of Sherriff himself and how he had been adamant that the play was not an anti-war piece but rather a snapshot in time that reflected his own experiences and those of people that he knew and served with in the East Surrey Regiment. He referred to a famous photograph, reproduced below in which many of the prototypes for the officers depicted in Journey's End appear. There is an older officer, who is clearly Osborne, a portly gentleman who is destined to be Trotter, as well as all of the other main characters. Sherriff himself said that he was based on Hibbert, who is a man clearly struggling with his own reserves of courage in a different way to that of Captain Stanhope, the Company Commander.

For our "live" introduction, I enlisted the help of my good friend and fellow guide Clive Harris, who like Taff, kindly agreed to give up his time to help with the screening. Clive hadn't seen this particular film version and this formed part of his introduction, in which he skilfully exploded a few myths by telling us how he hoped that the film makers hadn't fallen for some of the common errors and cliches made by many of the makers of First World War dramas.

Firstly, he expressed the hope that the story wasn't depicted as a story of the trenches, as by the time of the Spring Offensive, there were no trenches as such. The impression of many people was that the Trench system so typical of the 1916 battles, was the standard throughout the Great War but by 1918, Clive explained, this had evolved in to a series of Redoubts. The film makers, no doubt following Taff's advice, had this aspect absolutely correct and Clive's fears were allayed!

Secondly, he echoed a comment earlier made by Taff in that the film makers had insisted on depicting the Battalion Commander (played in the film by Robert Glenister) as a rather elderly Colonel, who is sitting in an office in the rear, in relatively luxurious conditions, far removed from those endured by his men. This had irked Taff and it had the same effect upon Clive, as by the time of the Spring Offensive, the British Army had ensured that they had the right men serving in the right jobs and had become far more professional in the process. The average age of the British Battalion Commanders - typically holding the rank of Lieutenant Colonel - was 30 years of age and these men were not in the rear out of harm's way but were fighting (and in many cases dying) alongside their men. One case in point being Lieut. Colonel Wilfrith Elstob VC of the 16th Manchesters, who had won his Victoria Cross posthumously on 21 March 1918 having previously issued the exhortation "Here we fight and here we die" - which as Clive said, was not what a soldier really wanted to hear from his Commanding Officer!

Clive then went on the mention the high esteem in which the play was held by veterans of the Great War. For them, it was simply the most accurate depiction of life at the front and of the interaction and camaraderie between officers and men living and fighting alongside each other. Clive went on to state that the Great War changed the social structure of this country for ever, largely because of the shared experiences of officers and men at the front which had brought about a more meritocratic system. The war had also given women a voice due to their involvement in the "Home Front" caused by the absence of men serving in the Armed Forces. He closed his talk by telling us how much he loved the work and as an ex-soldier himself, how much it rang true to him. He had read the novel as a young lad and to prove it, produced his original copy from his jacket pocket!

The screening itself took place in the splendid surroundings of Charlton House, a Jacobean Manor House originally built for Sir Adam Newton between 1607-12 but which later passed to the Spencer Maryon Wilson family and which, appropriately for our purposes, was used as a Military Hospital from 1915-18.

Some thirty five people attended and whilst the vast majority of those present were familiar with RC Sherriff's story, most were seeing this particular production for the first time. Directed by Saul Dibb, the film was originally given a limited release in 2017, followed by a wider release in the Spring of 2018. It stars Sam Claflin as Captain Stanhope, Paul Bettany as Lieutenant Osborne, Asa Butterfield as Second Lieutenant Raleigh, Tom Sturridge as Second Lieutenant Hibbert, Stephen Graham as Second Lieutenant Trotter and Toby Jones as Private Mason.

The plot will be familiar to anyone who has seen the play or read the novel but in order not to spoil the experience for anyone that doesn't know the work, I won't repeat it here suffice to say that it tells the story of the officers of 'C' Company in the run up to the Spring Offensive and how they each cope (or sometimes don't) with the knowledge of an impending attack upon their position and also the fact that they must mount a raid to obtain a prisoner prior to this attack. The acting is superb throughout but of those mentioned above, I would single out Paul Bettany as Osborne, known to his fellow officers as "Uncle" who represents the best of British-ness, unflappable, good-humoured and always with a kind word to say to his colleagues. Claflin as Stanhope, who is clearly suffering with PTSD, not recognised as such in 1918 (or in 1928 when the play was written) and who is self-medicating with alcohol is also very convincing as is young Asa Butterfield as Raleigh, a former school friend of Stanhope, who arrives full of wide-eyed enthusiasm, wanting to mix it with the enemy but who soon becomes more worldly-wise. Toby Jones as the Company Cook also plays a superb part, with many pithy one-liners to lighten the mood of the film at times.

The 2018 Charlton & Woolwich Free Film Festival is one of a series held across London during the course of the year and the process will soon begin of thinking up a programme for the 2019 Festival - watch this space!

For those interested, here is a link to Taff Gillingham's introduction to the screening.

Thanks are due to all who helped on the night with the screening and to all those who attended the event.

Posted by Steve Hunnisett at 14:49 No comments: