The Defender of London 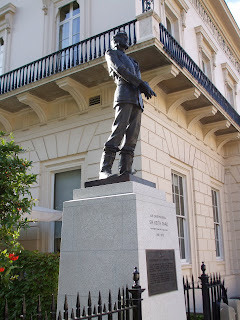 Last week, on Battle of Britain Day, a statue of Sir Keith Park was unveiled in London, finally ensuring belated recognition for the man the Germans called ‘The Defender of London.’

Keith Rodney Park was born in Thames, on the North Island of New Zealand on 15th June 1892, the son of a Scottish geologist. He was educated at King’s College, Auckland and later Otago Boys’ High School, Dunedin, where he also served in the Cadet Force. He later joined the New Zealand Territorial Army in the Field Artillery but in 1911 at the age of 19, joined the Merchant Navy as a Purser.

On the outbreak of war in 1914, he left the Merchant Navy and joined his Artillery Battalion, serving at Gallipoli, going ashore at Anzac Cove in April 1915. In July of that year, he was advanced to Second Lieutenant and was involved in the attack on Suvla Bay in August 1915. At about this time, he took the unusual decision to transfer to the British Army, joining the Royal Horse Artillery. Park was evacuated from Gallipoli in January 1916 and was both physically and mentally exhausted by the experience. However, the ANZAC commander, Sir William Birdwood had made a great impression on Park, who admired his leadership style and attention to detail.

After Gallipoli, Park’s battalion was shipped to France, where he took part in the Somme Offensive. It was here that Park first became aware of the value of the aeroplane, noting how German aircraft were used for reconnaissance purposes to spot Allied artillery positions. It was on 21st October 1916 that Park was wounded after having been blown off his horse. He was evacuated back to the UK and was pronounced ‘unfit for active service.’ After a period recuperating at Woolwich Barracks in London, he decided to transfer to the Royal Flying Corps in December 1916.

In the RFC, Park learned to fly and became an instructor from March until June 1917, when he was posted to France and joined 48 Squadron flying the newly introduced Bristol Fighter. It was not long before he enjoyed success in shooting down two German aircraft and was awarded the Military Cross for this deed in August 1917 and promoted to Captain shortly afterwards, in September 1917. After a break from flying, he returned to France to command 48 Squadron in the rank of Major and by the war’s end, his final ‘tally’ was 5 destroyed and 14 shared. He had also been shot down himself twice during this period. The end of the war found Park physically exhausted but he found time to marry London socialite Dorothy Parish, forever known to Park as ‘Doll.’

The interwar period saw Park offered a permanent commission in the newly formed Royal Air Force as a Captain, which when the specialised RAF ranks were introduced in 1919 translated to Flight Lieutenant. He served as a flight commander in 25 Squadron from 1919 to 1920 before being selected to attend the RAF Staff College in 1922. Following this, he commanded various RAF Stations and was an instructor before being promoted to the rank of Air Commodore and an appointment as Senior Air Staff Officer (SASO) to Air Chief Marshall Sir Hugh Dowding at Fighter Command in 1938.

This was the beginning of the partnership that was to reap such rewards during the Battle of Britain and which was also, due to petty jealousies within certain quarters of the service, to lead to both men’s dismissal shortly after the Battle had been won.

Promoted to the rank of Air Vice Marshal, Park was appointed to command 11 Group of Fighter Command in April 1940 and as such was responsible for the defence of London and the Southeast of England, during which his command bore the brunt of the Luftwaffe’s attacks.

Keith Park was an astute commander who believed in deploying his squadrons carefully in pairs in order to meet the enemy well forward of their target rather than the ‘Big Wing’ tactics favoured by his fellow group commander, Trafford Leigh-Mallory at 12 Group. Leigh Mallory was somewhat jealous of Park’s command and wanted it himself, together with a share of the glory. It is fair to say that if Leigh Mallory’s tactics had been used by 11 Group during the Battle, then the outcome would have been disastrously different. These large formations took too long to organise, so that by the time they were ready, the target airfields of 11 Group would have been pulverised. Unfortunately, in the long run, Leigh Mallory had friends in the Air Ministry who ensured that Park and Dowding were removed just as the Battle had been won.

To sum up Park’s contribution to the Battle of Britain, I can do no better than to quote directly from Stephen Bungay’s excellent book, ‘The Most Dangerous Enemy:’

“Park’s performance was extraordinary. In the way in which he anticipated and countered every move of his opponent, it has many parallels with Wellington’s at Waterloo; but whereas Wellington sustained his concentration and bore the strain for some five hours, Park ran the Battle for five months. He consistently showed complete mastery of his weapon, of events and of his opponent. Even today, with hours of leisure to ponder decisions he took in minutes, and with full knowledge of hindsight and what was happening on the other side, it is difficult to find ways of improving on his conduct of operations.”

Following his removal from 11 Group in December 1940, Park was posted to Flying Training Command and gave this operation a thorough shake up before again being posted in July 1942 - this time to Malta, which at that time was an island under siege and being bombed day and night by the Luftwaffe. He again faced one of his old opponents in the form of Albert Kesselring and gave him another beating, using the same tactics that had served him so well during the Battle of Britain, using pairs of squadrons to intercept the enemy well forward. Within a fortnight of Park’s arrival, the bombing of Malta had stopped and by November, the first unmolested convoy reached the Island and the siege was over. From this time, Park took the offensive in supporting the Allied landings in Sicily, where the Allies established air superiority.

He served in Egypt for another spell but when his old rival Leigh Mallory was killed en route to taking up his position as Air Officer Commanding of South East Asia Command in 1944, Park was appointed in his stead and was a resounding success in this role, being present when Mountbatten accepted the formal Japanese surrender in September 1945.

He was retired from the RAF in 1946, when Arthur Tedder, the new Chief of the Air Staff informed him that there was no suitable position for him in the peacetime RAF. He went home to New Zealand with Doll, where he embarked on a career in civil aviation, before eventually passing away in 1975.

However, Tedder made amends when in 1947 he made a speech at the annual dinner of the New Zealand Society in London in which he said:

“If ever any one man won the Battle of Britain, he did. I do not believe it is realised how much that one man, with his leadership, his calm judgement and his skill, did not only to save this country, but the world.”

Praise indeed and justifiably so but perhaps the final word should go to a German appraisal of some of their opponents, obtained by the Air Ministry in 1944. Park, they said, was regarded as efficient with staff work but was also a courageous man of action. He had earned, they said, the title ‘The Defender of London.’

Never have truer words been spoken.

The Narrow Margin – Derek Wood with Derek Dempster - Hutchinson 1961
Posted by Steve at 22:32