Saving an Icon: The St Paul's Watch and a Flawed Hero 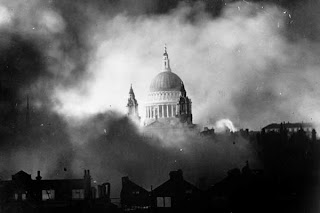 Probably everyone today is aware of Herbert Mason's iconic photograph of St Paul's Cathedral standing proudly and seemingly untouched amid a sea of smoke and flame on the 29th/30th December 1940, the night that became known as the Second Great Fire of London. This photograph was circulated around the World and became a symbol of the British people's defiance against the Nazi hordes waiting across the Channel.
The truth is that far from being undamaged, the famous old cathedral did in fact sustain quite serious damage on a number of occasions during the War and on the night that Mason's photograph was taken, came within a whisker of joining the ten Wren churches destroyed within the Square Mile on that fateful night. Let us therefore tell the story of St Paul's Cathedral during the War and of those individuals who ensured the survival of Sir Christopher Wren's masterpiece.

During The Great War, the Dean and Chapter of St Paul's had formed the St Paul's Watch in order to guard the Cathedral against German air attacks, which in those days came from the giant airships colloquially known as Zeppelins and the Gotha biplane bombers. In that conflict, the Cathedral had survived unscathed and the Watch had been disbanded in 1918. In 1939, the Watch was reformed as a dedicated team of three hundred fire watchers and fire fighters formed mainly from the Cathedral's own staff but augmented by members of RIBA - the Royal Institute of British Architects - including the future Poet Laureate, Sir John Betjeman. About forty of the Watch were on duty at any one time, with more being drafted in during air raids. On the night of the 29th/30th December, it was estimated that some eight hundred incendiaries fell on and around the Cathedral, all of which were successfully dealt with by the Watch - all except for one rogue bomb which lodged in the lead covering of the Dome. This bomb was too high for those stationed on the Stone Gallery to reach and too far down for the members stationed on the Ball high above street level. As the incendiary fizzled and burst into life, the onlookers could only watch helplessly and pray that somehow the bomb would not fall into the Dome and ignite the timber framework that supported the whole structure, for if this were to happen then the Cathedral was certain to burn like the rest of the City, leaving just a shell. Just as things were looking desperate, either a miracle or a result of gravity occurred, depending on one's point of view and the bomb fell outward, bounced down the side of the Dome and landed on the Stone Gallery where it was pounced upon by members of the St Paul's Watch and quickly extinguished.

The St Paul's Watch was disbanded once again after the war but was reformed once again in 1952 when it was renamed The Friends of St Pauls who today sell guidebooks and assist visitors to the Cathedral.

Even at this relatively early stage of The Blitz, this wasn't the first time that St Paul's had come close to destruction; this had happened just five days into The Blitz, on September 12th 1940 when a tale of bravery and heroism unfolded that ensured the Cathedral's survival but which would ultimately end in disgrace for one of the participants. During this particular raid, a 1,000 kg Delayed Action Bomb fell in the Dean's Yard and buried itself into the cloying London clay. At this time, the Bomb Disposal Squads did not have the means to defuse this type of bomb and the usual tactic was to evacuate the area and let the bomb explode, which usually happened within 72 hours. With St Paul's however, this was not an option; Winston Churchill had decreed that certain buildings were to be saved at all costs and St Paul's was one of them. So it was that Lieutenant Robert Davies and his team of three 'sappers' from the Royal Engineers arrived at the scene and began digging down to reach the bomb. It wasn't a simple matter though - the London clay was wet and the more the men dug, the deeper the bomb seemed to settle in the clay; so much so that by the time the team reached the bomb, it was thirty feet beneath the surface and to compound matters, fumes from a leaking gas main had overcome two of Davies's men and then to make matters even worse, the gas then ignited and the men had to retreat whilst the Gas Board turned off the supply. All of this wasted precious time but work was eventually able to resume and after the painstaking digging, Davies and his remaining assistant Sapper George Wylie, attached a steel hawser around the bomb and attached it to the winch on their truck and began hauling the monster to the surface. A short way into the process, the hawser snapped and the bomb slid slowly back into the clay. A second attempt ended the same way but with the third lift, the men succeeded in bringing the deadly bomb to the surface and it was at this point that Lieutenant Davies personified the phrase 'above and beyond the call of duty' by insisting that his men had faced enough danger and once the bomb was loaded onto the truck, he drove it alone to Hackney Marshes, where it was detonated, leaving a crater one hundred feet across. For their actions in clearing this bomb and undoubtedly saving St Pauls, Lieutenant Davies was awarded the George Cross, as was Sapper Wylie. The other members of the team Sergeant James Wilson and Corporal Herbert Leigh were awarded the British Empire Medal.

Lieutenant Davies's story was an interesting one, which after the award of his George Cross ended in ignominy and disgrace. Born in 1899 in Cornwall, he had emigrated to Canada at a young age and had served in the Canadian Army during the Great War. He had returned to this country shortly before the outbreak of war and had enlisted in the Royal Engineers, becoming a Bomb Disposal expert. Despite his undoubted bravery, Davies's fall from grace was rapid. In 1942, he was charged with and found guilty on multiple counts of Fraudulent Behaviour and Improper Use of Government Materials and Manpower for Personal Enrichment. He was sentenced to two years imprisonment but was released after serving six months and cashiered from the Army. In 1950, he emigrated to Australia, presumably to try and make a fresh start but cut a sad figure wearing medals for campaigns he could not possibly have served in due to his serving his prison sentence and subsequent dismissal from the Army. Davies died in Australia in 1975, aged 74.

The Cathedral was struck again on the night of 16th/17th April 1941, this time by a bomb that exploded, when a 250 kg High Explosive device pierced the roof and exploded on the High Altar, which was destroyed but mercifully without loss of life. This damage although serious, was not irrepairable but without the actions of the St Pauls Watch and of Lieutenant Robert Davies and his team coping with the earlier incidents, it could all have been so much worse.